Blogging Treme: At The Foot of Canal Street. 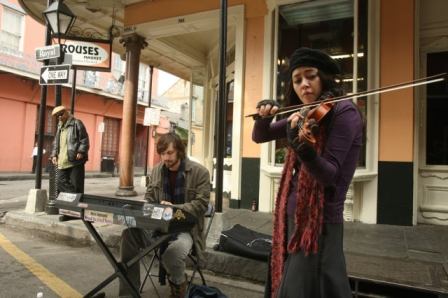 In quadmoniker’s recap of last week’s  episode of Treme she noted that the seemingly crawling pace of the show and its painstaking attention to detail would eventually come to fruition in the form of powerful storylines. “At The Foot of Canal Street” continued in this vein, not only adding another layer to what are becoming rich characters and giving us a greater glimpse of the story arcs to follow, but loosening up from the tension of last week and giving us hints of tongue-in-cheek humor that “The Wire” fans will recognize with fondness.

This weeks episode was a meditation on home and belonging in the midst of trauma and loss. We begin with Antoine in the emergency room, waiting for some attention for his injured mouth. During his frustrating wait he begins to sing, ad-libbing and scatting at first to the annoyance of the other people waiting and then their increasing approval as he croons, “I have roamed this whole wide world over, but New Orleans is still my home.” This underscores the essential truth of Antoine and the other residents who have weathered the storm and returned – there is nowhere but New Orleans. The lure of the city is so great for Antoine that even his love for his sons is no match for it. The pain and awkwardness of his estrangement from them is clear when he visits Baton Rouge with his inappropriate Christmas gifts. He is an outsider, not only in Baton Rouge but in the lives of his boys. When asked if he will stay for Christmas he answers that he can’t, he has to get back to Desiree and the baby…and the city he belongs to. Whatever hardships Antoine is facing in New Orleans – unemployment, baby mama drama, police brutality – he welcomes a return to it. As he tells the old lady on the bus, “Always a pleasure.”

Chef and restaurant owner Janette Desautel is struggling to keep her feet planted in the city that she loves, but unlike Antoine she seems to be swiftly running out of optimism. After being forced to close the restaurant due to water in the gas lines she heads out to get drunk, ending up in a bar with her on-again-off-again lover Davis. Janette finally reaches her boiling point after Davis has a flirtatious moment with fiddle player Annie. As she takes stock of her life nothing is right and she fears it never will be. Her house is a wreck, if she had the money to fix it she would just throw it into the restaurant and for a personal life she has the increasingly annoying Davis. “And for what?” she cries,” The city will never be the same!” It seems Janette is starting to think that trying to resuscitate her business and remain in New Orleans is just throwing good money after bad. Will the dream of New Orleans and its possible rebirth be enough to keep her there, or will she finally give up?

Juxtaposed with these natives are musicians Annie and Sonny, both New Orleans transplants. We find out that Sonny is from Amsterdam and grew up dreaming of New Orleans and its music. The revelation of his origins lends an interesting background twist to the withering disdain he showed the group of Wisconsan disaster tourists in Episode 2, as well as his fabricated stories of heroics after the hurricane. Sonny desperately desires to be “authentically” New Orleans. Prompted by feelings of inadequacy due to being increasingly overshadowed by his more talented girlfriend Sonny goes on a road-trip to Houston presumably for the opportunity to showcase “real New Orleans jazz” at a bar gig. He finds momentary satisfaction on stage but is ousted after a single number as someone more talented is invited up and he finds that authenticity is in glut: “We got to spread it around a bit – lots of New Orleans folks in here tonight.” Sonny is not real, he’s a novelty. He doesn’t truly belong but at least he manages to get the bouncer at the club to accompany them back to New Orleans, which he has never visited. Although he is on the outside looking in Sonny manages to afford someone else a view. In contrast Annie seems to blend effortlessly into the cultural and musical landscape of New Orleans due to her talent. She is at home with the other artists and is accepted in a way that Sonny is not. There is already resentment brewing between Annie and Sonny and her recent success in securing gigs is a harbinger of more trouble to come.

Of course, for every person longing for the comfort and sense of belonging of home, there is someone else fighting to get away. We’ve already seen that Delmond Lambreaux has a fraught relationship not only with his father but with New Orleans. In this episode we are invited to view his life in New York and witness his reluctance to be pulled back into the trappings of home. He has done all he can to distance himself, the last thing he wants to do is return. There is expansion on a theme introduced by Delmond in the past – that New Orleans produces musicians but does not appreciate them. As his agent encourages him to go on tour and play up his roots listing a number of artists from the city, Delmond insists that while he may be from New Orleans he does not play New Orleans jazz, and all of the successful artists are alike in this regard. However, New Orleans’ hold on Delmond may be more tenacious than he wishes as his professional success appears dependent on associations and opportunities forged there. Indeed, the tour his agent wants him to join culminates there. As the series continues hopefully Delmond will be the vehicle to flesh out these themes of attraction and repulsion to home and the relationship of expatriates to their culture of origin.

There’s  no shortage of further interesting points to note but to prevent this from becoming a dissertation here are a few choice moments:

– It seems Albert will finally have someone to pass down the Indian tradition to in the form of Darius. It also doesn’t hurt that his aunt Lulu can burn and has “a crack that needs tending to upstairs”. Mhmm.

– LaDonna still has one hell of a soft spot for Antoine. The scene of him serenading her at the bar was perfect.

– Davis for city council? Pot for Potholes? Say it ain’t so.

-“F@*! YOU, YOU F#!ING F$&*S!!!” As a vigilant commenter low mein pointed out 2 weeks ago, Creighton Bernette’s character is based at least in part on late blogger Ashley Morris.

– And in closing another commenter shout-out to Seanathan for linking to these great blog posts by Dave Walker of the Times-Picayune that explain all things Treme. He demystifies the references in the show and is an invaluable guide to those unfamiliar with the geography, language and music of New Orleans.