The unfolding petrochemical disaster along the Gulf Coast is really not a surprise, except in the swath of its complete and total mayhem. Paul Krugman says we should have seen it coming.

And maybe that’s true. But Jesus … we only get one planet. At what point do we completely f*ck it up beyond repair? 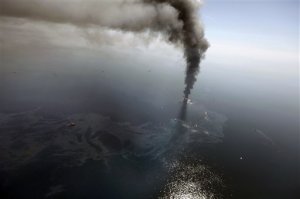 An aerial photo taken in the Gulf of Mexico more than 50 miles southeast of Venice, La., an oil slick is seen as the Deepwater Horizon oil rig burns. /AP Photo

Also, The Big Picture has collected a series of images from Louisiana’s coastline as the oil spill continues to wreak havoc in the Gulf of Mexico.

Investigators have found the person who owned the 1993 Nissan Pathfinder that was ferrying the undetonated car bomb found in Times Square on Saturday evening. Though they’ve yet to name a suspect, the police are focusing their investigation on a man seen in a video changing his shirt near the SUV. (G.D.)

But on the other hand, Adam Serwer points out that Obama’s riff about predator drones was in really poor taste. (Blackink)

Also, the NYT Magazine highlights all those 20-somethings in the Obama White House. And if you’re decent enough, Michelle Obama will hook you up with this cute girl that she knows. (Blackink)

The Times also takes a look at charter-school movement, finding that they aren’t doing that much better – and in a number of cases, worse – than their public school counterparts. Dana Goldstein has a follow-up on the piece with a few small critiques. (Blackink)

NOLA.com has 23 of outgoing mayor Ray Nagin‘s most memorable quotes over the past eight years. Chocolate is mentioned at least three times. (Blackink)

Gawker has more details on the “cat fight” (ed. note: I hate that term) that resulted in Stephanie Grace’s exposure as an, ahem, racist. Also, Jesse Taylor at Pandagon addresses another problem with the “dumb blacks hypothesis”; Amanda Marcotte follows that up with a post about JAQ-ing off; and Nancy Leong reminds us that we’re asking the wrong questions.  (Blackink)

Over at Sociological Images, an illuminating series of posts and charts on how rising rates of unemployment disproportionately affect youth, and male members of the working class. Not that everything is rosy for women – job segregation continues to contributed to gender pay gaps, particularly for working class women. (Alisa)

As “the pill” turns 50, Geraldine Sealey explains why hormonal contraception has been a pain for her and why women need more choices. “Our lack of options isn’t just annoying or inconvenient. It’s a serious public health matter, and one that prevents millions of women from truly being in control of their reproductive lives.” (Blackink)

Fresh Air interviews former Louisiana death-row inmate Wilbert Rideau, who has penned a new memoir, In the Place of Justice. Rideau covers his incarceration in great detail, including how he was rehabilitated and how he practiced serious journalism within the prison walls. (Blackink)

Blogging while black. Or something. (Blackink)

Pittsburgh is the nation’s most livable city, according to Yahoo. And then two cities in Utah finished second and third. Clearly, livable is subjective. (Blackink)

Roy S. Johnson revisits the plight of baseball and the disappearing black athlete and somehow gets inside the head of the late great Jackie Robinson. (Blackink)

And finally, Kobe is really on some other shit. (Blackink)