It’s been a fairly epic week for Kanye, even by his lofty standards. He may have never beaten a white artist head-to-head for a Grammy, but he just became a father and lots of people seem to like his new album. 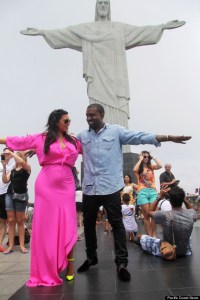 Not surprisingly, SCOTUS has ruled Arizona’s citizenship proof law was illegal. Consider it a victory for voting rights activists and non-racists.

SCOTUSblog, however, cautions the decision could be something less than a significant victory for the federal government.

Here’s a list of everyone being detained at Guantanamo Bay and their formerly shrouded detention statuses.

What does the gender wage gap say about society? Better question: what sort of answer were you expecting from Miss Utah?

Also, there was a hint of truth in Miss Utah’s admittedly convoluted response.

Our founder and leader, Gene, writes over at Code Switch about a new “angry-making” study that finds “blacks, Latinos and Asians looking for homes were shown fewer housing options than whites who were equally qualified. And fewer options meant higher housing costs.”

Stacia, on what being an unmarried mom taught her about fatherhood.

A racial history of drowning. (G.D.)

“You’re wearing an XXL T-shirt you plan on wearing the day your novel comes out. The front of the T-shirt says, ‘What’s a real black writer?’ The back reads, ‘Fuck you. Pay me.'” Kiese Laymon, ladies and gents. (Terryn)

When all of your superheroes look nothing like your children. (Sean)

It just got real in those Sesame Streets: meet Alex, the first Muppet to have a parent in jail.

So long to the Golden Arcs and Big Mick’s: the McDowell’s in “Coming to America” is going to be demolished.

A father writes a letter to his daughters, to be read at a much later date, about appreciating LeBron James.  “I’m exhausted by my inability to figure this guy out.” h/t Decker.

Several Naval Academy football players will face charges in connection with an alleged rape of a female midshipman in April 2012.