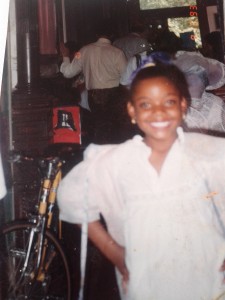 We pass each other and he doesn’t recognize me. It’s been over a decade since I’ve spoken to my father and much longer since I’ve actually seen him. I used to joke to myself that I wouldn’t recognize him if I passed him on the street. But I do and the jolt of recognition–the slight sadness that it’s one-sided makes me panic. I text my sister: He just walked into the restaurant.

My father has a pattern. Every eight to 10 years he decides to make contact. The voicemails began about a month ago. Finally on a Saturday afternoon, I pick up the phone, accidentally. What follows is a conversation rich with awkward silences and one word replies. He asks me about things my casual friends would know the answers to. I wonder if it feels weird for him to interview his own child.

At the restaurant, neither my sister or me sit next to him. We eat thai on Myrtle avenue in Brooklyn. The restaurant is pretty typical–mid priced, mostly takeout, plastic chairs, obligatory Buddhas. It’s a small space and there aren’t a lot of windows. I long for a window. The interview continues. We ask for our history.

He’s watching his sugar cause he’s diabetic. Probably because of the sweet tooth I had when I was younger, he says. I take note. I too have a sweet tooth. It’s a sugar habit I must battle very consciously and daily. We’ve got about five other aunts and uncles. One aunt, for reasons unclear, or rather reasons he seemed reluctant to get into–as with many other topics that evening–suffered a stroke at the age of 37.

My father has other children. Six in total. We want to know our brothers, my sister says. As a teenager, I’d entertained the thought that had my mother had boy children he’d made more of an effort to see us. He runs down their names. My father mentions a son he hasn’t raised. That’s part of what caused all the trouble….you know, he trails off. He means between him and my mother. The more I learn of their relationship the more I wonder how I managed to be born. They seemed to be at war for most of their courtship. The child he hasn’t raised is about my age.

From my maternal aunts, we know that my step mother was my mother’s friend. We don’t talk about her during dinner.

I’m different than my sister. I’m more likely to keep things to myself then explode. Man, you got a lot of kids, she says and not entirely amicably. He’s nervous. Which I find almost charming? He can’t sustain eye contact with either of us. You know when I was growing up, he says, parents didn’t talk to children like we’re talking now. One of my maternal aunts said something similar to me recently. She struggled growing up in Haiti and knowing that her child emotions and whims weren’t regarded with any level of importance.

When I was 19, my father and I had a vicious back and forth. He was sure I’d been brainwashed by my mother into hating him. But I didn’t hate him. I still don’t. His inability to take responsibility for the disappearing acts and other unmentionable behavior puzzled me. During our fight I remind him that his consistent absence is what’s contributed to my low opinion of him. He doesn’t take that well. That’s the last time I’ve seen or heard from him until the calls start a few weeks ago. It’s my belief that most people–and to be frank, I mean men, don’t grow up with the intention of having children they won’t care for.

When the food comes, he drops his fork. He’s on edge. I’m grateful for something to do besides force conversation. We’re all silent for some time. How incredible? A thing like silence. It can be peaceful, scary, brooding, imposing, God given, or nothing at all. This silence screams. It’s heavy with lost time and unspoken resentments. He asks how our mother is doing and I sense discomfort in his voice. I think, as I’ve often done in the past few years, how it’s a gift that he wasn’t around. My parents had too much hate for each other to co parent responsibly.

He refers to me by my sister’s name and when we correct him he collapses in his seat and apologizes. It’s like he’s just struck out big time with a woman he likes. We’re careful not to be too reassuring when he apologizes. Only familiarity would make confusing our names a passing error of an aging parent. My mother did it a few weeks ago. She’s earned the right.

There’s some laughter. The evening’s not entirely tense. Although those parts are mostly lost to me now. He declares when dinner is over, as he did over the phone, that we’re going to be doing this all the time now. He declares. He does not ask.

I accept his offer to drive me home. It’s raining and I’d rather not take the train. My sister has driven herself to the restaurant and lives about 15 minutes away. My father lives in Flatbush. the same place he’s always lived.

To increase the level of my suffering, I used to love to tell this story in this exact way: When we lived in Brooklyn. My father lived 15 minutes away. He never came to see us. Sometimes I’d add: He lives in a big house with his wife and his other kids. None of this is false. However, my attachment to the story was how I staked my claim in the history of fatherless daughters. His absence set off a chain reaction and it was my fate to become this: A girl, a very needy girl, destined to search for daddy’s love between the legs of various men.

I’m an introvert. There are exceptions, but most social engagements take a lot of effort. Over the years I’ve made peace with this. Most of my family knows I don’t talk very much. My father doesn’t know this. In the car, I sense that he thinks I’m being rebellious towards his efforts at conversation. It’s just that I don’t have a lot to say. He starts to interview again. Do you have a boyfriend? Do you like your place? I really liked the restaurant. How’d you find it? How’s work? Why’d you cut your hair? (Until recently I had longish dreadlocks). He seems preoccupied, or rather overly concerned with my appearance.

Before I’m able to sit down, just moments after walking into the restaurant, he asks where all my hair has gone and tells me that I’ve put on weight. I want to tell him that you need a frame of reference to determine whether or not I’ve put on weight. Seeing my once every decade isn’t measurable. I recognize that comment for what it is–discomfort and fear. For the first time in the evening, I think it may be a blessing that he wasn’t around when we were younger.

As we pull up to my building, he tells me that I look and laugh so much like my mother. In his voice, I hear a tint of accusation. Yes, people tell me that all the time, I say. He kisses me and tells me that he loves me. I stare back and wonder if I still need this. There was a time when I would have wanted this kind of affection from him. A time where I declared that I was unable to have a relationship because I didn’t grow up with this–although, it didn’t occur to me as a child that my father missing was a big deal until people around me started making it a big deal.

In 2009, after learning of Obama’s open letter to his daughters and feeling like I lost something essential, I was overwhelmed with jealousy. I didn’t actually read the letter until a year, or so later. Long ago, I let go of the notion that all of my scars where because of one parent’s absence. I decided, and with the help of a therapist, and an ever growing self-help book collection that I didn’t want to turn 30 and blame my parents for anything.

Today, I’ll read status updates as the outpouring of father love on social media has already begun and sometimes I’ll feel a pang. Over the years it’s gotten smaller.

He leaves. As I enter my apartment, I feel gratitude. Some people never hear a kind word from their parents. I’ve been around those people and I recognize that things could be much, much worse. I made peace with his absence. Lived with it for many years. However, I’ve yet to live with the possibility of his return. Now that it’s here. Well.