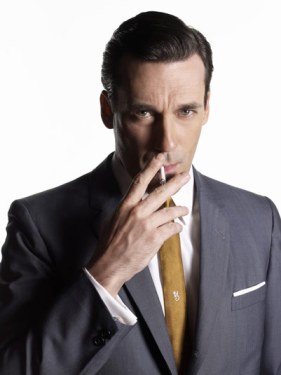 Our constant readers know there are few things we here at PostBourgie look forward to more than a new season of Mad Men, so one can imagine my sigh of contentment on Sunday night sinking once more into that world of sharp suits, cigarette smoke and intrigue.

Season 4 picks up a year after the close of the last which saw the creation of the upstart agency Sterling Cooper Draper Price. The boys at SCDP have come a long way from that hotel room they were holed up in – they’ve managed to garner enough buzz that Don is being interviewed by Advertising Age. The episode opens with Don skewered on the same hook since day one: “Who is Don Draper?” Don is clearly uncomfortable as he watches the reporter scribble in indecipherable shorthand and struggles to find something to say about himself, reacting with familiar guardedness. In past seasons we have seen the psychic battles between the man that was Dick Whitman and the idea that is Don Draper. It would seem that in the wake of striking out boldly with SCDP and attempting to be its front-man, Don will be forced to conceive of and create Don Draper the brand – a task he clearly had not anticipated.

Unsurprisingly, Don’s reluctant interview yields a lackluster article that renders no insight into himself or the company, focusing instead on his impenetrability. The headline: “A Man From A Town With No Name”. As if that wasn’t bad enough he’s called a “handsome cipher” and a reference to “The Picture of Dorian Gray” is thrown in for good measure. It all has the effect, as Roger so aptly puts it, of making him sound like a prick. What Roger and Bert understand, and Don is stubbornly fighting against, is that being partner means selling, in some measure, yourself. Don still wants to be the contract-less, unorthodox creative director who isn’t pinned down to a particular image. He cries petulantly at Bert’s suggestion of a new interview with the Wall Street Journal, “My work speaks for itself!” To which Bert sagely and firmly counters, “Turning creative success into business is your work! And you failed!” In typical fashion, after Don is upbraided he becomes edgy and destructive, chastising Peggy (more on that in a minute) and blowing up at a client. He does see the light though and does the WSJ interview embracing his role as the face of SCDP. It will be interesting to watch how this new facet of Don Draper (and the ego-ridden foibles it is sure to precipitate) develops as the season goes on.

The rest of the gang is in full effect – Pete seems far more self-assured now and less slimy, but who knows if that will last. Peggy is still on her quest for validation of her talents and Don’s positive regard. While her appearance is much more slick and put together now, it’s clear that she is still dealing with some old insecurities. We see hints of it when she asks why Pete can’t come see her and the new guy in their office and her nervous giggle and cigarette smoking when she explains how the Sugarberry PR stunt went awry. Peggy can hold her own through the occasional hiccups now though – when Don accuses her of not thinking about the company’s image (ironically, since he is unable to define it or himself) she replies stingingly, “Our image remains pretty much where you left it.” Score Peggy.

Finally a note on what remains of the family Draper. Henry Francis and Betty have married and are still living in Betty and Don’s old house along with the kids. Sally is taking the divorce very badly as we could have anticipated from last season, going so far as to act out and vomit on Henry’s mother’s Thanksgiving dinner.  The happy family tableau was rather forced with Henry’s mother taking a dig at Betty with a veiled reference to divorce. Early in the episode Don expresses reluctance to force Betty out of the house and sell but this goodwill is exhausted when he is forced to wait hours for Henry and Betty’s return after he takes the kids (minus baby Gene) for the weekend. Betty is her usual infuriating bratty self, insisting even after Henry agrees they should leave the house that, “there’s nothing out there and he (Don) doesn’t get to decide!” Like Henry’s mother I am baffled as to why he married Betty and why he seems to want to make this work.

This was a monster premiere and there are volumes of things I haven’t even begun to touch on but I trust y’all can take it away in the comments. Here’s the odds and ends:

It’s pretty awesome to see Joan in her own office. This episode was very Joan light but I’m looking forward to seeing more of her. I wonder if Dr.   Rapey McMolester is deployed to Vietnam yet.

That thing Peggy was doing with the new temp guy is “John and Marsha” by Stan Freburg.

Roger inviting Don to Thanksgiving, saying he needs “someone white to carve our turkey.” WTF?

That Schwerner, Chaney and Goodman reference was shoehorned. I cringed a little bit.

Is it just me or was that date extremely boring? Maybe it was because Jane’s little friend reminded me a lot of Betty.

Speaking of Betty, seeing her interact with her kids, especially Sally, becomes more and more upsetting.  Her casual thoughtlessness about whether Don would want to see the baby irritated me too.

Don’s sad little apartment, his strange fixation on shining his shoes and the slap-happy hooker. Does Don feel like he has to do penance? Or is this is a larger part of him, something from that more retreating, submissive Dick Whitman part of his psyche?