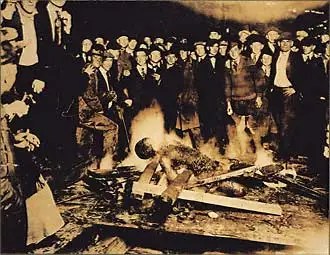 Before Monday, I can’t say that I knew much – if anything –  about Jeffrey Lord. I was probably better off, considering his online column posted yesterday morning at The American Spectator about Shirley Sherrod was breathtaking in its ignorance and shamelessness.

Lord essentially called Sherrod a liar for using the word “lynch” to describe the 1940s murder of her relative Bobby Hall in Baker County, Ga:

Here are some of the more provocative portions of the piece:

Shirley Sherrod’s story in her now famous speech about the lynching of a relative is not true. The veracity and credibility of the onetime Agriculture Department bureaucrat at the center of the explosive controversy between the NAACP and conservative media activist Andrew Breitbart is now directly under challenge. By nine Justices of the United States Supreme Court. All of them dead.

It’s also possible that she knew the truth and chose to embellish it, changing a brutal and fatal beating to a lynching. Anyone who has lived in the American South (as my family once did) and is familiar with American history knows well the dread behind stories of lynch mobs and the Klan. What difference is there between a savage murder by fist and blackjack — and by dangling rope? Obviously, in the practical sense, none. But in the heyday — a very long time — of the Klan, there were frequent (and failed) attempts to pass federal anti-lynching laws. None to pass federal “anti-black jack” or “anti-fisticuffs” laws.

Having now insisted that the slightest deviation from the truth can only be deliberate falsehood that ruins credibility rather than a mistake, Sherrod’s defenders are staring at the cold, hard text of a 65-year old Supreme Court case in which nine Supreme Court Justices, eight of them FDR appointees, have unanimously agreed to the facts in the Bobby Hall murder. Facts that make Sherrod appear, to put it mildly, prone to exaggeration if not worse.

Of course, an all-star cast of bloggers went ahead and took him to task on his shaky grasp of the facts. Among them, Matt Yglesias, Adam Serwer, Radley Balko and Terry Krepel at Media Matters.

And speaking of the facts, on my bookshelf at home sits a book of photographs and postcards titled “Without Sanctuary.” The book provides a particularly grotesque and illuminating look at the quality of the racial violence that gripped the South for decades. And deep in the lead essay, “Hellhounds” by Leon F. Litwack, I found these lines particularly interesting:

… When whites condemned lynching, they seemed less concerned over the black victims than over the very real possibility that white civilization itself was on trial.

And then I’m reminded of Lord’s insistence that Sherrod’s claims are rebutted by “nine Justices of the United States Supreme Court” and “the cold, hard text of a 65-year old Supreme Court case.”
It’s clear that Lord doesn’t know much about the racial terrorism that gripped the nation in the late 19th century and early 20th century. But if he does know about this, it would definitely be better for Lord if we assume him as merely ignorant on this issue.

The law was no sanctuary for unfortunate souls like Bobby Hall. Shirley Sherrod and anyone interested enough to read up on American history knows this.

But since Lord is doubling down on this foolishness, arguing semantics and drawing comparisons between “Southern racists of yore and, say, the Obama Administration policy in Arizona,” it’s hard to know where this mean-spirited defense is coming from.

Surely Lord knows that the criminal justice system at the time was in no way interested in equal protection for black Southerners (some might argue this applies even today), no matter that the Sheriff and his minions acted “under color of law” and “had legal authority,” which are concepts in conflict with each other anyway.

And surely Lord doesn’t want to play word games with the terms “mob” and “lynching,” given that groups of white Southerners still managed to find all sorts of creative ways to terrorize black people just outside the margins of the dictionary and the law.

But if he does want to do all these things, then we know it’s no longer about ignorance.

Which makes him what, exactly?