The easy joke – and one made endlessly on the innanets yesterday – is that BP CEO Tony Hayward is finally getting his life back.

But that’s not really true.

Hayward is being shipped to Siberia to oversee a joint venture between BP and a group of Russian oil billionaires. And for all his troubles, Hayward will receive a $930,000-a-year pension when he steps aside in October.

Which probably is not the yachting season in Russia. So there’s that. 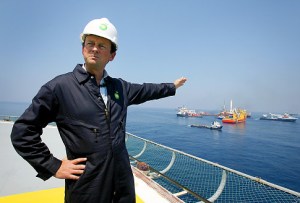 Maybe we should just start calling this weekly feature the late Monday or Tuesday roundup, just to hedge against my Monday morning failures. But I hope you all didn’t miss the links too much.

1. As you might expect, Glenn Greenwald has high praise for Wikileaks, erm, leak of more than 90,000 pages of classified material about the war in Afghanistan from 2004 through 2009. “Anyone who believes that the Government abuses its secrecy powers in order to keep the citizenry in the dark and manipulate public opinion — and who, at this point, doesn’t believe that? — should be squarely on the side of the greater transparency which Wikileaks and its sources, sometimes single-handedly, are providing.” (Blackink)

3. Melissa Harris-Lacewell says we’re missing what should be the point of the Shirley Sherrod story, and that’s overcoming racial differences to help address economic inequality. She noteshow nice it is that the white farrmers came to her defense. All of that is true, but I think I’d prefer it if the white farming family had a story of their own. Why is the onus on Sherrod to have overcome prejudice? It’s hard for me to imagine the relationship with Sherrod didn’t change some preconceived notions on their end, too. Or maybe it didn’t, and that’s cause for concern. (Monica)

4. Dave Weigel writes about life in the ideological center in Washington. (Monica)

5. Greg Sargent argues that the recent flap over the exposure of JournoList’s e-mails  proves there’s a right-wing media conspiracy, not a liberal one. And Roy Edroso notes that some on the outer reaches of Wingnuttia have started publishing lists – with pictures – of some of JList’s participants. Fun facts: 85% of them are white and gay. (Blackink)

6. The Pew Research Center found that mainstream media coverage of black Americans was very limited in the first year of Obama’s presidency. But maybe that’s a good thing. (Blackink)

7. Our very own Monica B. Potts had two thoughtful posts at TAPPED today, one about a jury in Missouri gone wild and another about a federal judge’s ruling that Quinnipiac College in Connecticut could not count varsity cheerleading as a sport for the purposes of complying with Title IX. (Blackink)

8. Speaking of PB alums, Shani is guest-blogging at TAPPED and Feministe this week. Read her! (Blackink)

10. What’s the deal with all those ambitious, difficult women causing problems in the workplace? (Blackink)

11. Young Adult author Hannah Moskowitz weighs in on why boys skip the YA genre and move quickly into adult fiction. Her conclusion: “We’ve stripped boys of substance and we did it to empower girls. Somehow, the message ‘girls can do it too’ became ‘only a girl can do it,’ and men became the weaker sex in YA.” (Belleisa)

12. Ronald W. Dworkin discusses “The Rise of the Caring Industry.” What’s attributed to the rise? It’s what Dworkin refers to as “a mass loneliness” which began with the “Age of Anxiety” – aka the 1950s. (Belleisa)

13. The blog Literary Kicks wants to know why philosophy gets “so little respect these days.” (Belleisa)

14. At Slacktivist, Fred Clark makes a case for outlawing HR departments from checking the credit scores of potential employees. “The credit agencies are standing in the way of any solution to our largest and most urgent national crisis. They will have to be moved out of the way.” (Blackink)

15. Tom Levenson renews his sonnage of Megan McArdle. Susan of Texas at The Hunting of the Snark joins in on the fun.

16. Internet experts predict that the world could run out of IP addresses in less than a year. (Blackink)

17. The Texas State Board of Education “never seems to run out of bad ideas.” This time, Paul Burka reports, the far right-leaning panel plans to set up a $100 million loan program for charter schools. (Blackink)

18. Big Boi goes it alone amid problems with his recording label, and comes up big. Meanwhile, Rick Ross cares little what you think of him or his past and his music is better for it. (Blackink)

19. Jeff Pearlman tells us to stop waiting on the emergence of the WNBA because it isn’t going to happen.  Ben York responds. Pearlman responds to York’s response. (Blackink)

20.  In Miami, Dan Le Batard reminds us that our opinion of 3 Live Crew probably depends on our perspective. LeBron “James went from likable to unlikable somehow in an hour of TV, and that is instructive. Fans will extend a great deal of love or hate based on nothing more than whether they like you or not, rationalizing arguments on your behalf or against you.” (Blackink)

As always, thanks for sticking around until the bitter end. If you get the urge, offer us advice on how to get invited to the new JournoList or send some e-mails from your private listserv in the comments section.