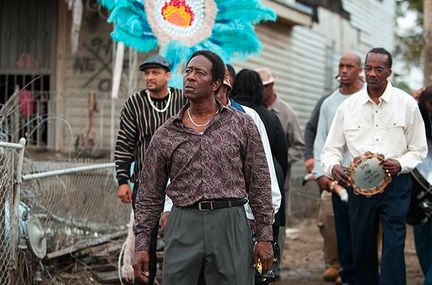 I have to admit, I hadn’t watched Treme until last night. It’s not because I didn’t want to watch it, it’s because I really really did. I’ve never started watched a David Simon show as it unfolds, but rather in a months-long Netflix binge that makes the whole thing more like reading a book than watching a weekly show, which is as it should be. I knew the first complaints about Treme was that it would be slow. I wanted to watch it build instead.

And that’s what the show does, a slow-motion immersion into a new world that both respects you enough to get it’s peculiarities on your own and doesn’t care whether you do. Sunday night’s episode, the third, concentrated on indignities, large and small, the Treme-residents are still putting up with four months after the storm.

The episode opens with Antoine banging a stripper, and then coming home to his wife, who rightly accuses him of cheating on her. We then quickly visit Davis in jail, who rather heavy-handidly tells his attorney, played by Melissa Leo, “I just want my city back.” I understand that his character loves New Orleans, and Treme, and wants everything to be normal, but this lines makes too broad a really personal sentiment. I wish he’d said something that sounded more like it related to him rather than a grand vision of a Great American City, and said “I just want it to be normal here again.” Some of the other characters occasionally drop lines of a city-wide ethos and desire, but when they say it, it rings true.

Ladonna’s family still can’t find her brother, one of the many prisoners lost during the storm, and almost no one cares to find him. She reaches out to her brother-in-law, a civil court judge who promises to make some calls (which, realistically, might be all he could do in real life, but he’s a jack-ass about it.) Leo, who also is this family’s attorney, tries to reach out to a small-parish sheriff and asks him, sensibly, to simply take fingerprints. But the sheriff rudely puts her off. One can imagine the bureaucratic nightmare that would be opened by him acknowledging that he has a prisoner under the wrong name, but one can’t forgive him for refusing this sensible act.

Sonny, the keyboard player who feels left out after his girlfriend Ann gets a fiddle gig, goes home and drinks the wine he bought her for her birthday after scraping together $20 in change. Lambreaux finds a body that’s languished for months under a boat, and when he and his group sing a plaintive and then somewhat jubilant lament, a Katrina Tour bus comes through to survey the disaster porn. And the troubles aren’t over for Antoine, who stops to sing a beautiful little song on the street where Sonny and Ann are playing, only to run into a cop car, get beaten for no reason, and being forced to drop his trombone.

Up until then, the music had been a salve, an interjection to the frustrations of normal life. Now, the music was the source of the indignity, bringing the unwanted gawkers into a private moment. The show is slow-paced and impressionistic, but only so that it can build more power along the way.