Home » Browse PostBourgie » ‘Son, Do You Know Why I’m Stopping You For?’

‘Son, Do You Know Why I’m Stopping You For?’ 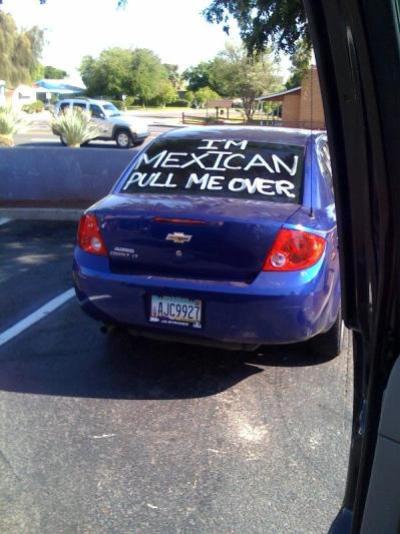 This comment leapt out at my while reading the NYT’s scene story on Arizona’s SB 1070, the state’s draconian new immigration law.

…Ron White, 52, said he felt a sense of relief that something was finally being done about “the illegals” — whom he blames for ills like congregating on the streets, breaking into homes in his neighborhood, draining tax dollars and taking jobs from Americans.

“I sure hope it does have an effect,” Mr. White said of the new law as he packed his car with groceries. “I wouldn’t want to show proof of citizenship, but I also don’t feel it is racial profiling. You are going to look different if you are an alien, and cops know.”

C’mon, y’all. This is stupid. We don’t need to pretend as if this is some hypothetical, and that this law might have the unintended consequence of allowing Arizona law enforcement to racially profile, detain and harass Latin@s. We already know it will, and we just need to look at how the state police have done their jobs in recent years before SB 1070’s passage for proof.

Guadalupe is one of the small Maricopa communities that have a contract for police protection with the sheriff’s office. Its population is almost entirely Latino and Native American, and one day last year [Sheriff Joe Arpaio] launched a major raid there, with a helicopter, paddy wagons, and scores of deputies, including helmeted officers on horseback. They stopped and demanded I.D. from pedestrians, motorists — basically every dark-skinned person they saw. (The sheriff’s office calls these raids “crime suppression” sweeps, and insists that the raiders stop only people who are violating the law.) It was standard practice, Arpaio style, complete with a press release and news crews. Indeed, it was the third such operation in less than a month. But dusty little Guadalupe is not a standard Maricopa community. It is an old town, a throwback, not given to the transience of urban sprawl. Many of its residents live in the houses they were born in; very few are foreign-born. And few appreciated the invasion by Sheriff Joe and his team.

Protesters materialized, many waving homemade placards urging Arpaio to leave. Motorists honked in support. Guadalupe’s young mayor, Rebecca Jimenez,  confronted Arpaio in a parking lot where he had established his command center. Why, she wanted to  know, did his press release say that Guadalupe town officials were alarmed about illegal aliens in their midst? They were not. Arpaio went ballistic. “He was waving his arms like a crazy man,” Jimenez told me. “I had to wipe the spit off my face. He said, you’re the one that caused all these riots!’ He said he was going to come back the next day. I said we didn’t want him. They did come back. But he didn’t.”

Arpaio chose to direct the next day’s Guadalupe operation, which was more modest, from a remote command post, and Jimenez was hailed, at least in some circles, for her courage. The two-day raid netted only nine suspected illegal immigrants, but reportedly produced a high volume of traffic tickets, including charges for “improper use of horn.” Jimenez noted that the raid came in the middle of an election campaign. He used our community to get media attention,” she said. “You know, Brown Town. But he got more than he bargained for.”

The Guadalupe raid did have a chilling effect. It began the day before a Catholic-church confirmation ceremony — a big deal in Guadalupe — was scheduled to take place in the village plaza, and although the children had prepared for months, a number of them were afraid to come out, and missed their own confirmations.

[Arpaio] is, as ever, unapologetic. Over lunch in New York, he told me that he doesn’t mind the effect he has. “If they’re afraid to go to church, that’s good.”

This law’s supporters basically have to believe that its passage will spur deputies and cops into suddenly employing their powers with restraint and discretion, or  develop some magical  ability to tell the “good guys” from the “bad guys.” Again, this is stupid. When you focus the broad attention of law enforcement on a particular community, you implicate everyone in that community in some kind of criminality. It doesn’t lead to fewer baseless (and potentially disastrous) police stops and arrests — it leads to more, because  everyone is a suspect. It’s also incredibly myopic, as these tactics sow antipathy between the communities on lockdown and the authorities policing them that becomes extremely difficult to dismantle, if it even can be — which seems like a  disastrously high price to pay because a bunch of cynical lawmakers want to shore up their “conservative” bona fides in an election year.