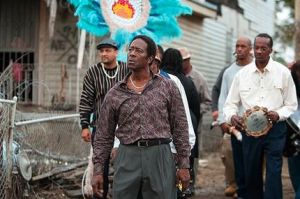 From the very start, we were warned.

“Treme” is not “The Wire,” and anyone tuning in to HBO at 10 p.m. Sunday – or watching the show through some illegal feed – expecting something similar was going to be disappointed. You would have to be patient, meet the characters and learn their motivations and ambitions before rendering judgment.

This ain’t no hackneyed cop drama, you dig? And this isn’t some BET-inspired minstrelsy. This is a show about real people enduring real troubles in a city that’s as much myth as anything else.

LaToya Peterson said as much before the pilot episode ever aired:

These types of shows are about affirmation in a vacuum of constructed portrayals, of individually truthful narratives where people only expect to see pathology.

And to some people that might be boring. Not that there’s anything wrong with that.

But if viewers stick around until the end, I get the feeling that “Treme” will be rewarding in ways that fans of David Simon have come to expect.

After two episodes of “Treme,” Simon and Co. are still painstakingly introducing us to the show’s central characters. There’s not a lot of time for shots of dead bodies, or abandoned neighborhoods, or even flashbacks to the flood. Nothing gratuitous like that.

Instead we start off with New Orleans blues legend Coco Robicheaux sacrificing a chicken in Davis’ studio, something of a nod to the influence of voodoo in the area’s culture. We don’t see the bloody sacrifice, mind you, but we know that it happens when we see the blood smears on the wall later in the show.

From there we revisit restaurant owner Janette Desautal (played by Kim Dickens of “Friday Night Lights” and “Deadwood”) who leans hard on her family for a $6,000 loan to keep her business open while she waits for insurance and government loans to come through.  As Tim Fernholz mentioned over at The American Prospect, it reminds us of the troubles small businesses in poor neighborhoods had securing development loans from the federal government.

We’re then introduced to street keyboardist Sonny (played by Michiel Huisman), who can barely contain his contempt for a group of Wisconsin students in town to help with the recovery efforts – or as its often known in other precincts – disaster tourism.

I’m not sure if this is the voice of the writers or a really well-drawn character. Either way, I find it hard to sympathize with Sonny or Davis or even lovable Antoine Baptiste, who all come off as condescending in their smug devotion to authenticity.

“Have you ever even heard of the Ninth Ward before the storm? So why are you so fired up about it now?” Sonny asks the out-of-town do-gooders.

His annoyance is understandable. And not at all productive – that’s no way to earn a few extra bucks.

Maybe it’s a musician thing; once again, I don’t know. But tourists are people too and I suppose it’s here, with Sonny and the others, that Simon and Co. will highlight this dichotomy between the locals’ appreciation for charity and frustration with the general cluelessness.

Antoine is still drifting around town, stopping only to visit his girlfriend and baby mama Desiree (played by real-life Katrina evacuee Phyllis Montana LeBlanc) who is rightfully suspicious about where he spends his time away from the home. Whatever he’s doing, she figures, it’s not nearly enough to feed a family.

“There is a difference between a gig and a job, Antoine, you gotta get a job,” she tells him.

And it’s not even clear Antoine is all that worried about the difference; he nearly turns down one gig on Bourbon Street later in the show presumably because it’s, well, Bourbon Street.

Meanwhile, Antoine’s ex Ladonna is struggling to maintain her lounge in Treme while caring for her family in Baton Rouge.  Over at TAP, I suggested that Ladonna’s relationships with her current husband and Antoine might work as a class narrative, where “Treme” may explore some of these divisions even within racial groups.

What better place to highlight these class conflicts than in New Orleans — one of the original homes of the “paper-bag parties”?

You’ve got LaDonna’s current husband, who might be considered, ahem, light-skinned in some quarters, who seems to have a respectable job and is tugging at her and her family to abandon post-Katrina New Orleans. And then you’ve got Antoine, who Aminatou Sow noted in the TAP dialogue seems only to have “women and money problems in his life” and doesn’t seem to be looking to leave.

And then there’s Albert, who’s clearly not going anywhere either.

If only Albert could be our stoic hero. But “Treme” won’t make it that easy for us.

He wants to rebuild his tribe, his home, his city. This episode suggests things could get ugly if anyone gets in the his way, and offers a possible explanation as to how he ascended to “big chief.”

In a search for a copper thief who stole his tools, Albert confronts the likely suspect in an abandoned home. The boy’s insolence earns him a brutal beating at Albert’s hands. Possibly a fatal one – it’s not immediately clear.

If you were looking for a violent outburst reminiscent of “The Wire,” there you go.

But there’s no guarantee that there will be more bloody brawls. Kate Shea Kennon at blogcritics points to a recent radio interview where Simon and “Treme” co-creator Eric Overmyer posed the question: “Can you do a show about regular people – [a show] not about doctors saving lives or gangsters killing people or people making decisions about the fate of democracy in the West Wing?”

I think you can. And so far, I think Simon and Overmyer have done it well.

But the real question is: does anyone want to watch that show?