Your Random-Ass Roundup: Somebody’s Watching Me. 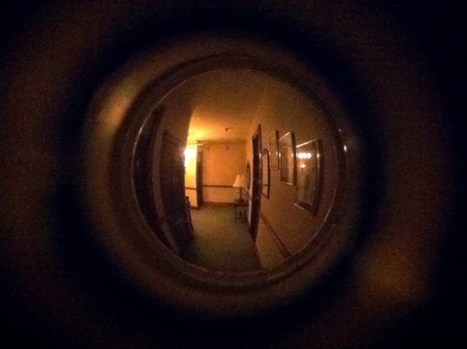 Turns out, Berry’s boy was right after all.

ICYMI: Edward Snowden, a former technical assistant for the CIA, has revealed to The Guardian that he was the source for leaks about the scope of the NSA surveillance program. “I’m willing to sacrifice … because I can’t in good conscience allow the US government to destroy privacy, internet freedom and basic liberties for people around the world with this massive surveillance machine they’re secretly building.”

David Simon, former journalist and creator of “The Wire”, doesn’t see the big deal. “When the government grabs every single f*cking telephone call made from the United States over a period of months and years, it is not a prelude to monitoring anything in particular.” (Justin)

Danah Boyd, a social media scholar, offers a few thoughts on the divergent reactions – essentially, outrage and apathy – of the implications of the NSA revelations. (Whitney)

Twitter was one of the few tech companies that declined to make things easier for the government to collect user data for their secret surveillance program. #nice

Snowden’s former employer, Boaz Allen Hamilton, has become of the nation’s largest and most profitable companies by doing the sort of work once done by the federal government.

Another can’t-miss-read from the weekend: “Will it make a difference?” Jackie and Mark Barden face a lonely quiet after their 7-year-old son Daniel was murdered in the Newtown shooting.

As George Zimmerman’s trial for the second-degree murder of Trayon Martin kicks off Monday, The Root reminds us “that it’s nothing new for a black man without a weapon to be killed.”

Central Florida braces itself for the start of the Zimmerman trial.  Here’s three ways Zimmerman could be convicted of murder, and three more ways he could be acquitted.

If the prevailing narrative is black women can’t find black men who are interested in a relationship, why is it that a recent NPR poll found single black men were much more likely to say they were looking for one?

By Bill Cosby is about all you need to know. Tracy assesses the reaction.

Sunday is Father’s Day, and so Snap Judgment —  the podcast sounds like This American Life refracted through your favorite hip-hop mixtape and you really, really need to be up on it —dedicates this week’s episode to stories about father figures. Unlikely fathers. Best fatherly advice. Reunions. And dads who aren’t so good in that role. (G.D.)

In September, Marvel is launching “Mighty Avengers” featuring many of their prominent minority characters like Luke Cage and Falcon. (Sean)

From GlobalPost, ‘Inside the United States‘, a piece premised: This is satire. Although the news is real, very little actual reporting was done for this story and the quotes are imagined. It is the first installment of an ongoing series that examines the language journalists use to cover foreign countries. What if we wrote that way about the United States? (Justin)

Salon.com interviews Daniel Bergner, journalist and author of “What Do Women Want?: Adventures in the Science of Female Desire.” The book “reveals how society’s repression of female sexuality has reshaped women’s desires and sex lives.” (Alisa)

Foxy Brown makes an appearance on The Combat Jack Show. Sample reader comment: “Is she on that powder?” (Justin)

When The Beautiful Game Turns Ugly. Or ESPN’s journey into the world of Italy’s racist soccer thugs.

And finally, The Administration is checking your e-mail.