Home » Browse PostBourgie » ‘You Can Touch My Hair,’ But Why? 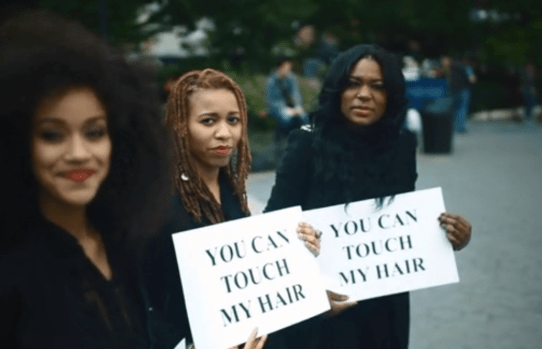 The website un’ruly held a public art exhibit in New York City this weekend entitled “You Can Touch My Hair.” Three black women stood in Union Square with signs that read “You can touch my hair,” welcoming strangers to come and cop a feel. The women had different hair types:  dreadlocks, straightened hair, a big, blown-out afro.

My intent was to have a piece on this event written a couple of days ago, but getting my thoughts together has been tougher than I thought. But now that I’ve had a chance to chew on this for a while, I’ve decided that this is either some amazing real life trolling or a misguided attempt at doing something important. Or maybe both.

I’m a woman with big hair who has had many a strange, uninvited hand in her head, and so my entire body and spirit reacted to this event. There is a special kind of violation that comes with someone putting their hands on you — any part of you — without your permission. When you’re at a club and someone puts his hand on your waist or the small of your  back to get your attention. Or you’re at a work function and a happy-faced woman in a business suit sticks her hands in my hair. When someone has decided that their desire to touch you is more important than your interest in being touched, you don’t feel very much like a person. And being asked by a stranger for undeserved permission to touch part of me is exceedingly creepy.

Race is  obviously big reason in why the hair-touching phenomenon is such an fraught thing, and it’s that troubling history that caused so many women to balk at this demonstration. Many on Twitter name-checked Saartjie Baartman, aka the Hottentot Venus, whose body was literally put on display for whites to gawk at. It’s an old fascination with black bodies —Look at all these ways in which you’re not white. Why aren’t you like me? Why aren’t you normal?

I understand that people are curious about things that they don’t have much experience with, but there are different types of curiosity here. There’s the “Wow, can I ask you about your hair?” kind, which I get very often from black women, and the “OMG I LOVE YOUR HAIR AND I AM GOING TO TOUCH IT WHETHER YOU WANT ME TO OR NOT” kind, which — surprise! — I get almost exclusively from white people.

Now the rebuttal here is likely that in holding signs welcoming strangers to touch their hair, the women participating are exercising autonomy in granting permission. Which is cool, but, well… why? Why should there be a safe space to satisfy that primitive curiosity without risk of scold or reprimand? Why shouldn’t acting like black people are aliens be met with some kind of corrective measure? What is gained from giving people access to do something that many feel wrongly entitled to do? Seriously: what is the point of this exercise?

The event page doesn’t give any information other than telling people when and where they can get their hands in some black hair. Intent is important, and I don’t know what the intent is here. It could have been a great chance to use satire to make a point about what the fascination with black hair feels like for black women. They could have had an old-fashioned sideshow barker with a megaphone beckoning people over to the women: Hurry, hurry! Step right up! For just $20 you can run your hands through the hair of an actual, real life black woman! Note the softness! Marvel at the sheen! Be surprised to discover that it’s just hair, and not the magical fabric of an enchanted carpet!

But there’s no context given, just the visages of black women holding signs giving strangers the discretion to touch their hair. And that’s what makes me nervous about it. Is the purpose literally to just let curious people touch black hair and wander off? Is there some sort of disclaimer given, preferably one that says “While touching our hair in this moment is fine, attempting this exercise elsewhere may result in you getting stabbed, slapped, punched, or otherwise assaulted?” Was there actual teaching done in this teachable moment, or was this simply an exercise in appeasing the privileged and entitled?

It seems like a ploy to get attention and cause a stir, which is fine. But what you do with that attention once you get it matters. The message that needs to be drilled in here isn’t that it’s okay for you to touch my hair right now in this particular space; it’s that regardless of your want to touch my hair, you have to ask first because my body is mine and what I want for it. And even more than that, I’d much rather explain to you why your fascination with my hair makes me feel like a pet or a science experiment rather than let you touch at will, because your hands in my hair doesn’t teach you anything.

At least one of the participating women is quoted as saying that she hates it when strangers touch her hair, and was participating because she wanted to be able to explain that to people. That’s awesome if you happened to be one of the people she spoke to. But it looks like most of the people interacting and discussing were other women of color, so the folks who could have really used that education didn’t get it.

So I’ve decided that this is some pretty exceptional trolling to make a few waves and hope for some constructive conversation as a byproduct. Because really, if talking was the intent, there are plenty of ways to make that happen. As it stands, this makes as much sense to me as standing outside with a sign that says “You Can Slap My Ass” in order to spark a conversation about street harassment.