The Golden Opportunity: On Fatherhood and Raising Nina. 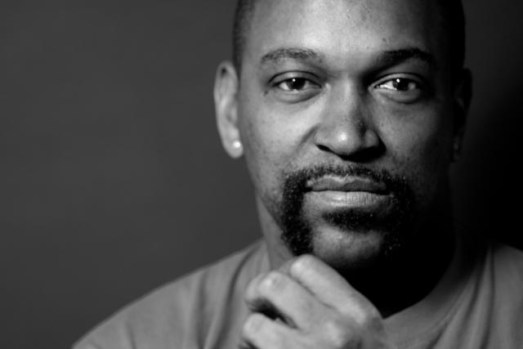 Acclaimed poet and performing artist Roger Bonair-Agard is the first guest to be featured in Beyond Baby Mama’s Affirming Black Fatherhood Series. Every day this week, as a lead-in to Father’s Day, we’ll be featuring the experiences and insights of unmarried minority fathers. We are proud to present his story.

Having spent three great (albeit tumultuous, on a personal front) years in Chicago, I was about to return to my beloved Brooklyn. Half of my stuff was packed. My moving date was two weeks away. I was scheduled to attend a wedding the following day with an on again/off again lover, whom I had dated fairly consistently when I first moved to Chicago, but now we saw each other every other week or so after having gone through a stretch of time when we had broken up and didn’t get down at all. It seemed like it’d be a chill enough road trip to go with her to her cousin’s wedding – a six-hour jaunt to Cincinnati. But she wanted to talk to me that night, the night before we left – urgently. I couldn’t understand why because we were going to be sitting in a car for six hours the following day. So I meet with her and she drops The News. I’m stunned. She was on the pill. I ask, “What do you want to do?” She says, “Oh, I’m keeping it…”

Three months later I’m having coffee with a friend I haven’t seen in years in a coffee shop at the corner of Franklin and Fulton in what used to be one of the most gully neighborhoods in Bedford-Stuyvesant, Brooklyn. This woman is a brilliant, thoughtful, sensitive, poet with whom I went to college. We’ve enjoyed a parallel poetic literary evolution in the world, even publishing books with the same press. My time in Brooklyn now is temporary as I make plans to return to Chicago in time for the birth and to figure out how and where I will be a father and co-parent. I tell her the story of how the ‘news’ got dropped on me. She says, “You know… I don’t believe a woman ever traps a man, but you ain’t exactly freed a nigga either. That’s that shit I call The Abstracted Trap.” We bust out laughing over our expensive coffees, can’t stop giggling for five minutes before we return to the morning sport of hipster-watching.

But it dawned on me shortly thereafter that what happened between Lydia – lover/baby-mama – and I that evening was really powerful. Faced with an unplanned eventuality, we both made very empowered choices. She wasn’t waiting to hear what I wanted to do, and one can surmise that at that moment she was quite willing to get on with her life with a baby even if I had said I wanted nothing to do with it. Indeed, I felt in that moment empowered to do that if I wanted. After all, we were having sex with the assumption of protection from pregnancy (though I’d like to stress that one should be aware that babies are a potential consequence of any kind of fucking). But I intended to be involved in a positive way in the life of any child I was ever to have, and so I made a choice too – to figure out, alongside her how we were going to raise a child. It is important to understand that not every one has the same kind of freedom of choice. Lydia and I are college educated, and both old enough to consider the responsibility of the choice (she, 27 and I, 44, at the time of The Decision). Neither of us had other children, or situations in our lives that would make attending to the task at hand any more complicated than it was already going to be. Straight away I decided I’d be back to support with doctors’ visits and what not, and for at least the first three months of the child’s life. As the pregnancy progressed and the idea of what life might look like I decided I’d be moving back to Chicago for at least the first year.

I forget who said it but I’ve heard, and am willing to get behind, this oft-repeated quote: “the best thing my father ever did for me was to love my mother.” My grail has become exactly this. How do I love my daughter’s mother? Nina was born one month ago as of the 13th of June. This is my first ever Father’s Day. What was to be a last fling kind of a “it’s been real, I’ll see you round the way when I’m back in town or you in Brooklyn” kinda deal, has turned into an elongated romantic consideration in which we’ve decided to live together for the first three months (during those turbulent feeding and sleeping schedules), and then close by, while continuing to share responsibilities for Nina, and lives as lovers. Because we have had in the past a non-exclusive sexual relationship though, there is the chance soon enough, of other lovers of ours entering Nina’s life. For me, the question about loving the child’s mother becomes more expansive. How do I make choices that allow me to model responsible, fair, fulfilling, loving relationships with any woman who enters my life, including of course, the woman whose importance in my life has now deepened and broadened a thousand-fold; her mother?

If you refer to the woman who has carried your child to term as ‘the mother of my child’, no-one bats an eyelid. Refer to her as ‘my baby-mama’ and folks bristle. Why would you call her such a thing? It appears that the connotation of the more colloquial reference is far worse than if I were to use the Queen’s English, and apart from the complex race and class undertones involved here, is the question about assumptions of what it means – to use an antiquated, sexist, phraseology – to make an honest woman of her.

Chances are that over the course of the next 20 years, my relationship with Lydia will evolve radically. The chance of its adhering to a conventional model of family life is slim. I’m going to be charged with ensuring that ours is a united front of respect and love and that ‘baby-mama’ has the same weight as wife, as mother of my child, as person with whom I will forever be fortunate to have made a child. Nina will need to see us work hard to accommodate each other’s needs, and to meet hers, and to respect each other’s boundaries. Most of all, she will need to be able to see her father as an ally towards respected personhood and feminist empowerment. I will have to work even harder to keep myself honest in that regard.

If you are a man who has had even moderate success in the dating arena, your friends will shake their heads when they hear you have a girl child on the way, or they will say it serves you right, or they will say it’s time to buy a shotgun or they will say – to the man with multiple daughters – poor guy! They will say, now you will know what it is like. Your infant daughter will immediately be cast in the role of the hunted, the infant boys – young hunters. Your daughter is prey before she has left the womb, and we hold this up. We celebrate the continuance of this every day.

If you haven’t already been engaging in this introspection, you will certainly consider the times you yourself participated in this and even if, like me, you fancy yourself enlightened, you will dig deeper into the crates of your romantic history attempting to deconstruct your own selfishness, your own roughshod run over the emotions of lovers past. You will be forced to cross-examine who you are/were, and to what extent you’ve taken advantage of the power of your being a man in the relationships in your wake. Whatever ghost of girlfriends past digging you have to do, you have to draw a line between yourself and every woman with whom you interact, romantically or no, and ask yourself about the nature of power, the nature of masculinity, the difficulty of the gender construct.

And when I say you, I mean me. And when I say you have to draw the line between you and all the women in your life, I mean I’m looking here at the first real opportunity I have to destroy the idea that a baby-mama is a less worthy individual than a wife and that there is such a thing as a woman, whom by her behavior, ability to marry or sexuality is more or less worthy of lofty position in our lives. Here is the chance, with a brand new girl human being in my life, to assert that not only does my baby mama come without the requisite drama, but that she is loved and treasured, her boundaries honored, and she is forever part of my family. She is no less so than if we were to be married, or exclusive partners, or any of the other ways in which certain kinds of relationships are privileged over others. She is certainly no less so than if I straightened up my diction, pronounced all my th’s and referred to her as ‘the mother of my child.’

When friends talk about how I will menace the boys who try to date my daughter, I wonder sometimes what then is my role if she decides she will date girls. Mostly, I hope that Lydia and I and her myriad aunties and uncles and godmothers and godfathers will have done such an awesome job, that menacing her dates is wholly unnecessary. Still, I fully plan to ensure that my daughter’s ability to defend herself physically, is formidable. I hope her ability to defend herself and open herself emotionally are equally formidable. I tell my friends that I have no intention to proscribe her sex to any greater degree than I would if she were born a boy. I want her to recognize the double-standard of the world she is in certainly, but I’m more interested in her feeling absolute ownership of her yesses and nos. I have more work to do in the deconstruction of my own transgressions in this regard. Much of that work must continue in therapy, but this here is the golden opportunity, to teach my daughter and her friends, and the youth whom I teach, boy and girl alike, the value of their choices, and the certainty of their ownership over them. Some day, if she so chooses, Nina Jane Merrill Bonair-Agard will be somebody’s baby-mama. She will be cherished. She will be loved. She will have entered and been embraced by someone else’s family. We will all be enriched for it.

Roger Bonair-Agard is a native of Trinidad & Tobago, and author of three collections of poems. His most recent, ‘Bury My Clothes’ is published by Haymarket Books (haymarketbooks.org).  He is Nina’s father.