Home » Browse PostBourgie » “I Would Not Run”: A Single Dad on Being Present.

“I Would Not Run”: A Single Dad on Being Present.

Our Affirming Black and Brown Fatherhood Series has gotten such great response this week that we’re adding a second featured unmarried dad today. This is Stefan Malliet, a 32-year-old Brooklyn native and father to three-year-old son Kyle. We were struck by Stefan’s candor and insights, particularly as it relates to his rocky road toward harmonious co-parenting, his thoughts on animus between black unmarried mothers and fathers, and his insights about single mothers raising sons. 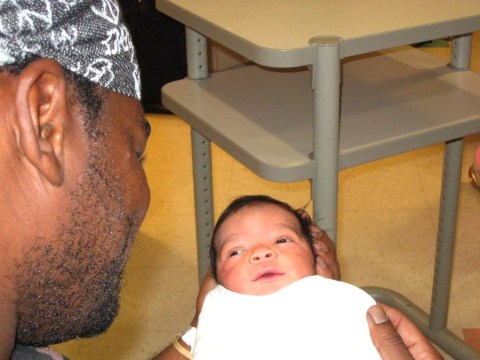 BBM: What’s one specific way in which fatherhood has changed you or your outlook on life?

The biggest change that comes to mind is the way that Kyle has become a huge portion of the context for EVERY decision I make. Whereas I used to be a relatively go-with-the-flow person, I now make sure that I take time to consider how any decisions in front of me would affect him; his present and his future. For instance: Who, how and when I date are extremely important now. While I have always (at least casually) considered the potential for positive influence in the women I’ve dealt with, now I specifically think about “is this the kind of person I would want around my son?” I’ve found that there are certain associates who I’ve decided not to deal with any more because of that reason.

BBM: Did you have an immediate idea of the kind of father you’d want to be?

There was one thing I knew about fatherhood as it pertained to myself: I would not run away. For better or worse, that was about as far as I had thought about it. I knew that I wanted children at some point, but hadn’t necessarily thought about what that actually means in real life terms. Once it came to pass that my turn was coming, I decided that I’d be – at the very least – someone who my son will be able to look up to. That means clearing out a lot of the cobwebs, old hurts, and bad habits that tend to build up over a lifetime of not necessarily dealing with them.

BBM: What is your relationship with your own father like?

I didn’t have a relationship with my father; I never met him. My “father” was my grandfather (mother’s father) and he is my hero. He passed on when I was just about to turn 16, which was unfortunate because I was just entering into that time where the transition from boy to man should have been starting. Fortunately, I feel as I have remembered enough of his examples and his words that I was able to integrate them into my journey. In short, that relationship was probably one of the most important thus far.

BBM: Do you co-parent? If so, what has been your experience with it?

Yes, my son’s mother and I are a team. Granted, it didn’t necessarily start out that way – due to the circumstances of our break up – but that’s the relationship we have both striven to form and protect. It started off rocky, because I admittedly wasn’t the best person to her during her pregnancy and didn’t always support her the way she needed. However, towards the end, once I realized how important it was to him that we not have an adversarial relationship. Luckily, we both recognize the importance of this and have been able to heal individually and as a team to that end.
Now, we do it together. We are sure to discuss the decisions we make for him, keep each other tightly in the loop about any of his changes and developments. We alternate nursing him when he’s sick. We’ve set up a schedule where he spends time with both of us and both of our families/villages. Thus far, that experience has been extremely positive. There is no requirement that says parents who are not together in a relationship must have crazy interactions. 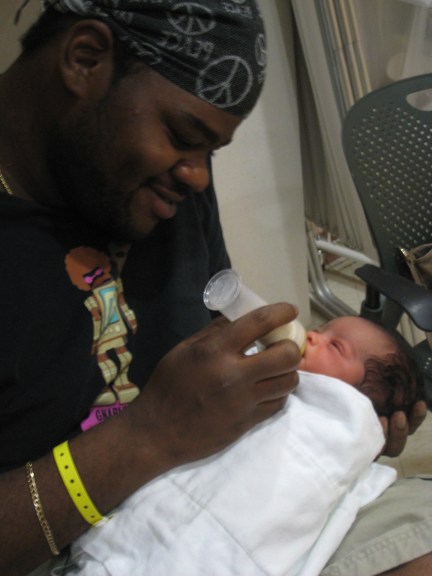 BBM: Describe your “village” (support system). Who helps you parent?

How much time do you have?

Our mothers are our Lieutenants. They are our first lines in the moments when neither his mother nor myself can be. Besides that, Kyle has many “Aunties” and “Uncles”, the men and women I call friends on whom I have called to help me in raising my son. I’ve been fortunate enough to have cultivated a large group of wonderful people who themselves are positive contributors to the world, and are willing to help me by providing examples for my family to grow and do the same.

I am very, very particular about whose energy I allow around my son and so is his mother.

BBM: Black single mothers and fathers are often painted in media and popular culture as enemies. Do you think real animus exists between black unmarried parents?

I believe that animosity exists because people expect it to. They manifest their expectations into their reality. Granted, the situations that lead to single parenthood (break ups, results of “hook ups”, etc) aren’t necessarily conducive to a team-oriented approach. Additionally, there can be aspects of disappointment based upon unmet expectations of the self and the other parent.

The issues with the above are: no one knows what they are doing. No one. Putting a group of people together with no clear direction, and with no individual who is necessarily capable of setting [a common course] for the group, is a recipe for disaster if not handled correctly.

My hope is that the media and culture stop perpetuating this story, so individuals can stop absorbing the nonsense and begin focusing on the children and their best interests. Compromise and cooperation are the keystones of effective parenting, regardless of the relationship between the parents.

BBM: Are any of your friends also single fathers? How helpful is that shared experience in shaping your approach to parenting?

Yes. I was fortunate enough to be in the perfect spot to learn quickly around the time Kyle was born. I was coaching youth football. There were tons of fathers, with varying experiences, around me [who were] open to having parenting discussions. I had a ton of questions. I still do, and they’re still around when I need them.

BBM: What is one thing you would tell a single mother to consider while raising a son?

Unfortunately, the way our culture exists today, it is impossible for a woman to teach a man how to be a man. I say this as a man raised primarily by women. On its surface, this statement may seem misogynistic of chauvinistic, but allow me some space to explain:

The reason I say this, is because no matter how hard a self-identified woman may try, she will never know what it means to be a man from the inside, on a psychological level.

Our culture creates and maintains spaces – physically, mentally, and emotionally – that are gendered (whether we like it or not), and to ignore that is to present an incomplete vision of the world. A well-rounded adult, which is the whole purpose of this exercise we call parenting, requires exposure to all of it from viewpoints that he or she can relate to directly.

BBM: What’s one piece of advice you’d give a first-time expectant father?

“You don’t know everything. And that’s perfectly fine. Open your ears, your eyes, and your heart and you will learn in time. Don’t be so hard on yourself.”

Stefan Malliet is an administrator at Kingsborough Community College in Brooklyn. He owns a graphic and web design consulting firm and is working on starting a buzz marketing and professional education firm centered around the entertainment industry.  His only son, Kyle Arnold Malliet, will turn three on June 26.