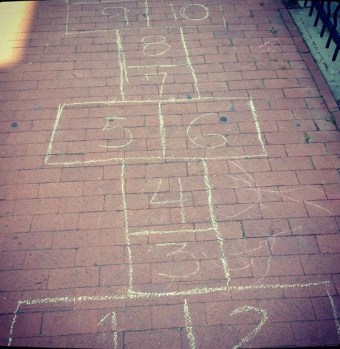 This post is from our play-cousin Jada F. Smith, and is x-posted from her blog, Casual Tuesdays, with permission.

He dangled the empty bottle of Jack over the balcony like the Yes Organic Market dangles its $5 apples over the neighborhood. He faked like he would throw it from the roof after shaking the last drop into his glass, but now we were both peering down at the three idling cop cars in the street below us, making up scenarios for what would have happened if he really had thrown it, with the bottle shattering over the red and blue sirens that didn’t seem in a rush to be anywhere.

I didn’t feel like holding my tongue when he asked, probably rhetorically, why the cops were always chillin’ over here in the first place. Old Jada would have held it in. Probably would have shrugged my shoulders and ranted silently to the audience in my head, who greeted all of my musings with “mmhmms” and “preach!”

“To make sure all the precious residents in this building feel safe from the guys selling incense on the metro,” I said, still managing to keep a light-hearted tone. He agreed, as I should have expected him to. He had just finished telling me about his time living in the Arizona desert for seven months and how he once hitchhiked from Northern California to New Orleans. I definitely wasn’t talking to a Let Them Eat Cake kind of dude.

I told him that I resented it. That I wasn’t even from D.C. and it still got on my nerves. That the people who had endured the crack heads and the crack-related shootings and the crack smoking mayor wouldn’t be the ones to enjoy the spiffed up buildings and the patio brunch specials. That the freshmen at Howard would probably be more inclined to get money than get involved on campus, because Froyo aint cheap and neither are those bright red Capital Bike Share bikes. And this, I said, and that, I said, and don’t forget about the other thing, I said — just like I had the night before, standing in the exact same spot, with a different homie, off a different kind of Jack.

He humored me — agreed when he felt like it and stopped me when I didn’t know what I was talking about. I liked him because he wasn’t bleeding with white guilt; he was just like, “true” when I told him how pissed I’d be if D.C. became majority white and miraculously got some Congressional representation. I smiled. We would have been a set of interracial freedom riders, I thought, as we headed down from the rooftop — the one with a million-dollar view of the Capitol and the Washington Monument and the Basilica and my alma mater and the cop cars that were just hangin’ out, I guess.

We exited the elevator that usually took me from that rooftop to my George Jetson-looking gym, to the 24-hour concierge that I had stopped by earlier to pick up my delivery from the locally sourced, organic grocery service I subscribed to after a hummus tasting. Then we crossed the street, past the spot which, legend has it, used to be a fish joint that old old Howard used to go to but now sells $15 burgers and cocktails du jour. That’s where we met, sipping something from mason jars and charming each other about how gross it is that we’re all so dependent on technology — shoot, none of us could probably even fish with our bare hands anymore, how pathetic. I gave him my number, kind of yucked out that his first text popped up in a green bubble instead of a blue one.

“D.C. is gonna be so different in like 5 years. SMH,” I thought, as I walked back home. It was late and I was checking over my shoulder to make sure that was just the wind behind me. I was by myself, wondering what that guy who just passed me said, too low for me to catch through my earbuds. Probably nothing. He was probably harmless. He was probably a church-going family man. I kept walking and hoped there were some idling cop cars around.