Ray Lewis and Murder, They Wrote. 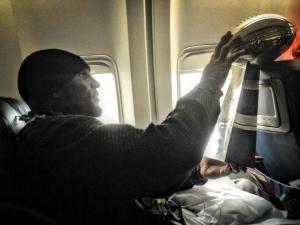 Ray Lewis entered the NFL in tears, mourning the death of his slain friend and roommate Marlin Barnes on draft day.

Ray Lewis left the NFL in a spasm of joy Sunday, a two-time Super Bowl champion at the conclusion of the final game of his 17-season career.

In between, Lewis went from an undersized pro prospect out of Miami to the best linebacker of his generation. He was also an enthusiastic ambassador for The Game. He was a motivational speaker, versatile pitchman and audacious proselytizer. He became a willing caricature of himself.

In recent weeks, he came to be known as something else: a murderer.

There has been renewed interest in his role in a double murder outside of an Atlanta nightclub in January 2000. According to court records and testimony, Lewis was present at the scene, may have thrown a punch during the fight and fled in a limo with the two primary suspects.

Long story short, Lewis did not commit murder. He pleaded guilty to obstruction of justice and then “did his best to help the prosecutors’ case” by testifying against the murder suspects. Ultimately, no one was ever convicted of murder in the deaths of Jacinth Baker and Richard Lollar – this was more about the strength of the case than Lewis’ crime.

Lewis was sentenced to 12 months’ probation, the maximum for a first-time offender, and later reached civil settlements with the families of both victims. He was also fined $250,000 by the NFL.

If he’s had a legal run-in since then, I’m unaware of it.

In part because of his run of on-field dominance, Lewis had managed to successfully rehabilitate his image. He starred in national advertising campaigns for the NFL Network, Under Armour, EA Sports and Old Spice, among others.

Lewis also has been involved in a number of charities in Baltimore, including his Ray Lewis 52 foundation which offers “personal and economic assistance to disadvantaged youth.” The foundation adopts 10 families in the city for the holidays, hosts food drives and raises money through a number of other endeavors. A portion of Baltimore’s North Avenue was renamed “Ray Lewis Way” in honor of his work in the community.

Until Lewis announced last month that he planned to retire, little had been said or written about that awful night in Atlanta 13 years ago.

Then all of a sudden, we were inundated with reminders.

A couple of media outlets staged a mother’s visit to one of the victim’s gravesites. The wife of New England Patriots receiver Wes Welker made a snarky reference to the murders on Facebook and later apologized.

And on the night of the Super Bowl, I set my Twitter search field to “Ray Lewis” and “murder” and watched the responses roll in by the thousands over the next few hours:

ESPN 8 THE OCHO ‏@ESPN_8_OCHO
Frank Gore says Ray Lewis & the Ravens “got away with one”. Reports haven’t confirmed whether he was referencing the game or the murder case

Artie Lange ‏@ArtieQuitter
Ray Lewis has 2 rings now. One for each murder!

On and on it went. I’m sure it’s still going on; I don’t know and I don’t care to know anymore.

Reflected in those slanderous tweets are the same mentality that makes it increasingly difficult for ex-offenders to fully re-integrate into society.

Whether it’s employment discrimination, disenfranchisement or other punitive laws, we have conspired to make it difficult for people to overcome their criminal history. The result? ”We will end up with a society in which some people who have messed up even just once never get a chance to turn their lives around — and we will have a permanent class of unemployable ex-offenders who find themselves with few choices other than returning to a life of crime,” Adam Cohen wrote for Time.com in 2011.

This isn’t necessarily a problem for Lewis, who hopefully has a healthy savings account and a number of professional opportunities as he limps away from the game. He’s not the poster boy for recidivism.

But our collective lust for a lifetime of penance is devastating for most everyone else. And because of the bias and systemic racism built into the criminal justice system, it disproportionately affects black men.

If Lewis can’t ever be publicly redeemed, what chance do the rest of us have?

At this point, I’m not sure what is expected of Lewis or if he can ever truly make amends to his unyielding critics. He cooperated with the authorities, met the expectations of the criminal justice system, resolved the matter through the civil courts and has said he “has to live with this everyday.” His name hasn’t shown up on a police blotter since.

And he left the game in a triumphant hail of confetti, a far cry from his mournful entry into the NFL. Over 17 years, he was a lot of things to a lot of people. A star. A narcissist. A leader. A hypocrite. A champion.

But he was never a murderer.