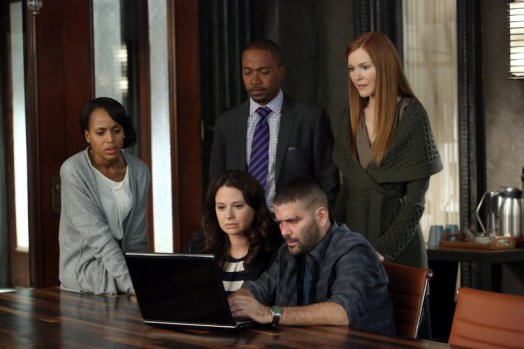 Sorry we’ve been slacking on our recappin’! It won’t happen no more. (Previously.)

One of the problems I’ve had watching Scandal over these many months is that the show seems to be dead-set on giving you anyone to root for. That’s not a bad thing, necessarily; even the most sympathetic characters on The Wire were capable of discomfiting venality, and the whole point of Breaking Bad and The Sopranos is that their main characters are/were essentially irredeemable monsters and viewers were implicated in their sinning. The problem with Scandal’s characterizations is that its writers don’t seem to have any clue how they want you to relate to their characters. Are they conflicted good guys? Villains trying to do right? It depends on what needs to happen in the plot that week.

Take Fitz. That whole time his cartoonishly villainous vice president was scheming to steal the Oval Office from him as he lay in the coma, I kept thinking: you know, she’s actually right! Olivia and Mellie and Cyrus were  covering up the fact that the head of the government was incapacitated and then, once he no longer was in a coma, that he was mentally and physically sound enough to resume his duties as commander-in-chief. But we know that wasn’t true! And his veep might have been a Southern-accented Cruella De Vil, but that doesn’t mean she was wrong. The whole point of the vice presidency was to do exactly what she was doing. Why is she the villain? BECAUSE EW! SHE GETS ON OUR NERVES THAT’S WHY.

So we’re supposed to bang with Fitz, the vaguely serial killer-y philanderer who hacked into a bunch of voting machines? Fuck all that talk about the strong ratings: Scandal’s greatest achievement is getting hundreds of thousands of black women to root for a Republican president who stole an election.

I don’t even know what to say about Olivia at this point. #lipquiver was fun at first, but she’s now done her whole lachrymal schtick so often that it’s impossible to believe she’s constitutionally capable of being the bad-ass the rest of the characters keep telling us she’s supposed to be. She spent most of the first act this week laid up — sans headscarf, as all of Twitter pointed out — because she’s suddenly so devastated by a plot that she was complicit in since its inception. And it makes her moral indignation, which always comes out in the most bizarre moments, so hard to take seriously.

“Get a lawyer, Cyrus!” she yells at her former homie after she decides he’s crossed some previously totally flexible moral line. “A good one.”

Oh, we acting brand new now Olivia? Suddenly she’s indignant about all of this Hollis mess?

A writer at the A.V. Club said that a problem with Homeland’s last season is that it was a character-driven show, in which the personalities of all the players are more or less set in stone and the fun is in watching those personalities react to the world they’re in (think Mad Men), that morphed into a plot-driven show, in which the character’s personality and motivations take a backseat to the events that move the story forward (think 24). That problem with the former is often that nothing really happens on a given show. With the latter, it’s that a lot happens, but none of it is of any consequence.

This is a show in which the president gets shot in the head with a high-powered rifle and is walking around, leading the country and coaching his wife through labor four episodes later. (!) It’s a show in which Olivia, the employer of the president’s suspected assassin (Huck) is never seen brought in for questioning and the person believed to be the actual assassin (Becky) is allowed to later have a jailhouse visit with the initial suspected assassin, who also a trained government killer. (!!)

Scandal thinks it’s the first kind of show when it’s really the latter.

As such, I just can’t feel bad when shitty things happen to any of these people.

Note on a Scandal:

In one of her three NAACP Image Award speeches this Friday (the President’s Award speech, presented by NAACP Prez Ben Jealous and film/TV icon Diahann Carroll, to be exact), Kerry Washington referenced both her role in Scandal and her recent portrayal of Broomhilda in Django Unchained when she said the following:

I don’t gravitate towards stories about perfect people in perfect situations because in real life, there is no such thing. […] Human beings are complicated, flawed and unique, but we all have a story to tell. Gone are the days where our characters can only look like someone else. Heroes look like all of us. We see ourselves in each others stories. We see who we are. We see who we want to be. Sometimes we see who we don’t want to be. Through that, we have a greater understanding of ourselves and acceptance of each other.

I would imagine the “someone we don’t want to be” she’s referencing is Liv — especially since she also says:

“Since this is an award for public service, I want to say that at the Democratic convention, I expressed deep respect for our constitution and the rights of we the people to elect our leaders. On Scandal Olivia (Pope) robs her fellow Americans of that very right.”

To be sure, Liv’s moral conflict about her role in the election theft seems to be coming out of left field. And this week’s montage, wherein a voiceover reminds us (and Liv) of all the things she should feel guilty about, felt too easy. Like, “Oh, by the way, all this stuff has been a problem for me, from my tawdry affair with a married father of three to acing my coworker out of her first ever shot at a healthy romantic relationship to using Huck for my nefarious killing and identity reassigning plans to lying repeatedly to #SenateBoo to locking arms with Foghorn Leghorn. Because I’m a Good Person who wears the White Hat. Deep down. Under all this friend-sabotaging and illegality.”

Since the beginning, this show has been worried about the wrong things, thematically. Its obsession with Good Guys and Bad Guys has always been tiresome and apropos of nothing that’s going on plot-wise, because like you’ve said: most of these people are the “someones we don’t want to be.” Whether they’re working for Liv or for the corrupt White House corps, none of their hats are “white.” And I’ve never been convinced that any of them care much about that; it’s why they’ve been successful at politics thus far, I’d imagine.

In fact, the person who hews closest to blameless or “good” in this scenario, DA David Rosen, is written as drab and naive (who’s really rooting for him to triumph over Liv, at this point? Who still believes he can?). It would probably be best if the show dropped its pretense of moral compass-checking and just went with the pieces that work.

For me, the things that still work about this show are Huck and Liv’s (toxic) friendship; Cyrus, even when he’s mustache-twirling; and the election theft plot — but only for the inevitable payoff, when Fitz finds out how illegitimate his presidency is and how Liv was instrumental in orchestrating that.

Liv’s crew still doesn’t work for me. Edison is laughable (because if you have to go to your fiancee’s coworkers for help when she’s depressing, stating, “She doesn’t open up to me the way she does to you,” what’s really real?). And Abby, Harrison, and Quinn have proven to be pretty expendable so far. (I’d care more about them — and buy them as competent more — if we’d met them when Liv met them, rather than so far into them game that they’re just telling us how great and unquestionable Liv is (and then doubting her and saying she’s off her game), we might be able to invest in why they were so loyal to begin with and why they feel so betrayed now. The flashbacks that constituted their backstory were way too quick.

As it stands, all we ever see them doing is piecing together information that we’ve known for a while already.

Oh! We haven’t really discussed the divorce yet, have we? Since we’re talking implausibilities, this is — by far — one of the hugest. Ol’ boy’s gonna leave his pregnant wife and kids for Liv, even after Cyrus drops all that science on him about the probability of the public turning against him afterward? Really?