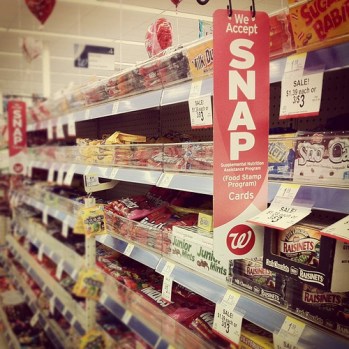 I can’t get into Cory Booker‘s weeklong food stamp challenge the way I’d like to, but it’s important to remember that all of the caveats about this exercise really matter. Because when we’re talking about poverty — especially long-term poverty — the devil really does dwell in all those inconvenient footnotes and qualifiers. You can’t neatly partition off hunger from stuff like inadequate housing or electricity or health care or safety or education. All those things are happening in concert and informing each other; their effects are cumulative. It’s hard to look for work or pay attention in school when you’re malnourished. It’s hard to keep food refrigerated if you can’t pay your electric bill. It’s hard to keep your food your food if you live with other people who are hungry too and who maybe can’t be trusted. My ex-girlfriend’s mother, a retired assistant principal in Detroit, once told me that school attendance would jump in the winter months; it was the only place the kids knew for sure that there would be food and heat.

Booker did this for a week and complained about the hunger pains. And that’s some real ish. But the accretion of poverty’s psychic costs doesn’t end when your belly is full. We know now that poverty saps people’s abilities to do effective cost-benefit analysis in all types of decisions; poor people already have to make too many of those least-terrible-option decisions each day, which means they simply choose not to make some decisions at all. Booker is a Rhodes Scholar and the mayor of a major American city. It’s hard to overstate how much it matters that there was always a discrete end to this for him, that he waded into the tunnel with the light at its end clearly visible, and that there were constraints on the tolls it could exact on him. Poverty isn’t just economic. It’s existential.

My good friend Latoya Peterson said something pretty simple a long time ago that has nevertheless stuck with me: you never get over being poor. We talked about this during one of our long, super-candid walks, and she confessed that she always felt like the prospect of homelessness was always stalking her, even now, as a well-connected, middle-class adult. She was the first person I’d ever heard say it aloud, but I shared the same weird, well-earned neuroses.

I remember my mom being embarrassed once when i noticed that she was using food stamps to pay for lunchmeat at Irv’s, the corner store around the corner from our house. She was doing what she had to do, exercising an option that would make our lives less fraught, and she was embarrassed, because we judge people for making this choice, for needing help. And I remember not having hot water at the crib at all during high school, and our stove not working. In order to bathe, we’d have to put a pot of water on a hot plate and lug it, gingerly, upstairs to the bathroom. For years, I took shallow baths that were either frigid or scalding. One of the best parts of going away to college for me was that I could take long showers, every day, in my dorm if I wanted.

That was a long time ago. But I still take long showers.