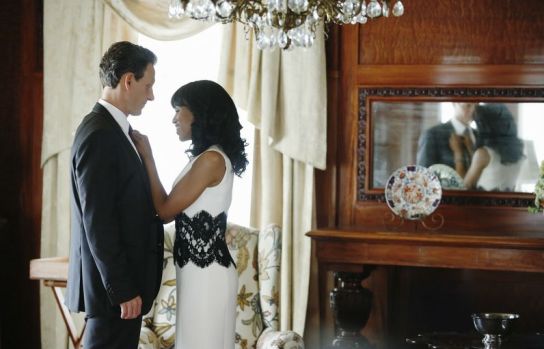 We have to talk about this red hoodie.

The big reveal at the conclusion of last night’s episode was supposed to be that it was Huck — ever the deus ex machina — who shot the president. But what he was wearing got a lot of attention, and it was this plot detail that finally pushed my friend Akoto over the edge. “I think I’ve finally broken my Scandal addiction,” she said.

This encapsulates just why Scandal is so polarizing. You either can walk with the show’s writers as they set up the idea of Huck as an efficient and highly trained assassin who nevertheless wears a fire-engine red hoodie and fumbles around for bullet casings when he carries out an historic crime...or you can’t. You either take issue with the idea that this show is ratcheting up the stakes even as it almost certainly doesn’t have the nerve to carry them through to their logical conclusions — Fritz actually dying or Huck getting caught and thrown in prison or killed — or you don’t. I don’t personally need a show to be hyperrealistic to bang with it; nobody is itching to see a federal commission question Liv about her friendship with (and employment of) a would-be assassin, for example. But it should have its characters adhere to the show’s own, internal logic. Maybe Huck isn’t an idiot and he actually wore the hoodie for a reason? (Meh. That’s still pretty silly.)

So I have a confession: I wouldn’t mind if Fitz were gone. That may sound mean, but we’ve been talking about how unsustainable this Liv-Fitz thing is since we started recapping. The flashbacks to the earlier days of the relationship underscore just how hard it is to keep shoehorning the two of them into the same script; this episode actually let the writers go back to a time when it made sense that they would be in the same physical space or when Liv would have seeming unfettered access to the White House. But it also showcased, yet again, that Liv and Fitz are also the most unsecret-est secret lovers in the history of the world. (Isn’t Liv’s whole job supposed to be discretion?) She has a history of having hushed, rushed conversations with the president in the corridors of the White House, where she is presumably checking in and out at ungodly hours. She’s at his bedside in the hospital after he’s shot. She essentially takes over as press secretary after the press secretary is shot. (Twitter says that that was Liv’s job at one point, but that still doesn’t make sense.) The First Lady knows. The president’s chief of staff knows. A Supreme Court justice knows. Persistent rumors about presidential affairs and impropriety have been based on much less.

Someone asked me to unpack that Sally Hemings line that Liv spits at him, but I wonder if their little dyad is worthy of that level of consideration. The comparison seems hyperbolic, and I think people who buy that formulation are too cavalier about the agency that Olivia has relative to Hemings and the broader context in which she wields that agency. (It is the show’s first allusion to race, or at least since I’ve been watching.)

But just because the Jefferson-Hemmings parallel is too simplistic doesn’t mean there isn’t a huge disparity in power in their tortured, apparently joyless secret relationship. (Um, he is the President of the United States.) During my first recap, I raised my eyebrow at how nakedly manipulative he was toward Olivia. (He asked Liv to fly to Europe with him on Air Force One, she declined, and then he gave her some sanctimonious speech about how he couldn’t be with her because of his newfound commitment to his wife and his office.) In his dealings with Liv, Fitz adopts the mien and disposition of an unhinged teenager. (Remember the sobbing as he looked at surveillance photos of her and #SenateBoo?) When they’re about to get it in on top of the Resolution Desk in the Oval Office, Liv tells him to stop — twice. When he’s telling Liv that he belongs to her — that he wants to give all his love to her — it didn’t seem romantic, but like passive-aggressive bullying. You told me that last season he offered to leave the presidency to be with her, which is such a dick move. This is all in your hands.

Miss me with that, Fitz.

I, too, cannot deal with the red hoodie. Huck has never worn anything other than earth tones, black, and plaids since we’ve known him. I just… no. Also: the big reveals that have viewers’ caps-lock and exclamation keys working overtime each week don’t always play for me. Sometimes, as in last week’s case, they’re no shock at all, having been spoiled in promos leading up to the airdate and telegraphed with really obvious, hammer-to-the-head dialogue a moment before. Sometimes, the “shocking twist” ending is too cheap or sacrifices logic and storytelling telling just to mine maximum audience awe (Read: Huck rocking a red hoodie). It’s hard to know how they’ll resolve this, but since we’re 90% sure that Guillermo Diaz’s job security isn’t in question, as he seems to be most folks’ favorite character next to Liv, we know it won’t make much sense.

Huck in the red hoodie is this season’s Quinn pulls scissors out of dying boyfriend’s artery. Pure shock. Zero logic.

Speaking of Quinn, we now know Foghorn Leghorn set her up to take the fall for the explosion that killed seven–something we could’ve guessed, since Liv and Huck were so invested in securing her a new identity and lying to her about it. Is there anyone more adept at scenery-chomping than the dude playing Foghorn Leghorn?

Onto the dreaded Sally Hemings thing. Full disclosure: I wrote an article that evoked that comparison last season, and man, did it come back to bite me. When I brought it up, it was to speak to the imbalance of power you’ve mentioned. Consider the things Fitz does to win and maintain Liv’s affection. He fires her. He sends Secret Service to her house and has her brought to him in the woods, where he literally pins her to a tree and gropes her as Secret Service looks on. He brings his wife to her cabin. He lets her touch the original founding documents of the country. He calls her house from the White House–often and against her protests. No never means no to him. No never has to mean no to him; he’s the most entitled man in the country. She repeatedly uses phrases like, “You own me,” or “I don’t belong to you.” We get the sense that even Liv feels like their seduction involves Fitz treating her like his property.

I don’t know. Liv/Sally Hemings is a lazy comparison and Lord knows I’ve owned that in the months since I wrote that piece. But to say that POTUS and Olivia Pope are “equal” or that Liv is actually wielding the power in their relationship–as the Scandal writers had Fitz suggest last night–is equally lazy.

Also: the Mellie-Liv dynamic has been an uncomfortable extension of those master-slave allusions. The way Mellie views Liv (as a sexual object necessary for her husband to feel powerful and even functional), the way she addresses her, and the way Liv looks (quivery-lipped, chastised, and teary) after almost every exchange they share… it’s unsettling.

This show’s treatment of women in general is troubling. Too often, we find Cyrus or Fitz dressing women down, barking at them, asserting their perceived authority over them. Even when the women bark back, they’re at the mercy of men’s whims. I suppose that’s a spot of political realism, but it can be wearying when the show is so insistent on calling itself a work of women’s empowerment.

There’s a lot more I want to say, but I’m gonna stop here and let the readers take over.