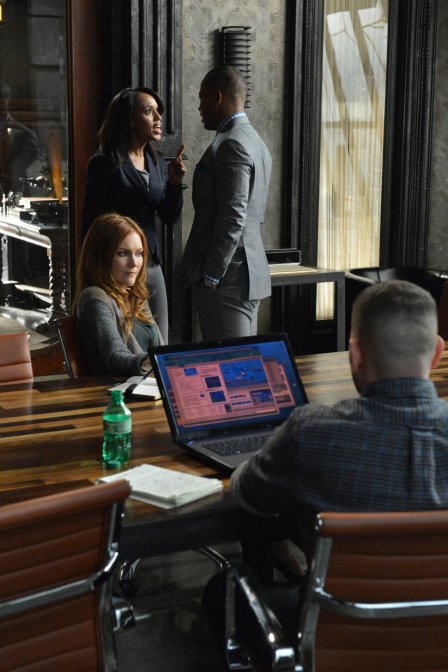 “I thought I told you to take my white clothes to the cleaners, Harrison.”
“It’s handled, Liv.”

When we last left Olivia Pope and the “parade of monsters,” as my play-cousin Linda Holmes calls them, the putative queen of the fixers had just been outed as the President’s mistress. Blowing up the secret of Liv and Fitz’s not-terribly-secret relationship —  the central tension of the show, really — is some ballsy-stakes-raising.

Another show would have let a huge plot twist like that reverberate at least through a few episodes. But in Scandal-land, we were hurried along to the next plot twist — Liv’s people made it look like another White House staffer was Fitz’s actual mistress. It’s this addiction to the Big Twist that makes Scandal so fun and also so maddening. My friend Rhonda pointed out during the watch party at my house1 that the throng of reporters that descended on Olivia’s car to grill her about her affair with Fitz seemed to be indifferent to the fact that Liv was rescued by Huck, who of course was the lead suspect in an assassination plot on that same president last season.  Indeed, after everything that happened on the show in its first two seasons, nothing has fundamentally changed: Liv and Fitz are still madly and annoyingly in love with each other, Mellie is still trying to use her broken marriage to further her political career, and Cyrus is trying to keep everything from blowing up. When we first started doing these recaps, I was going in blind since I ain’t watch the first season, and people argued that I was going to miss out on all kinds of important details. But that’s proven to be wrong: if the show doesn’t care about its fidelity to these details, why should I?

But really, I wanted to pick your brain about this Joe Morton situation, though. When Liv and her dad are having one of several shouting matches they had this week, he scolds her for not being more discreet, more careful.

“Did I not raise you for better?” he yells at her, spit practically flying out of his mouth. “How many times have I told you? You have to be what?”

Olivia is doing her cryface. “Twice.. as…good,” she says, trying to interrupt the snot bubbles before they happen.

“You have to be twice as good as them to get half of what they have,” her father reminds her.

Of all the things Scandal does that are frustrating — and there are so, so many — the thing that I find most jarring are its clunky, ham-handed attempts to inject racial commentary into the show. Last year, it was Liv’s ridiculous, sanctimonious invocation of Sally Hemings and Fitz’s hilarious insistence that the sight of an interracial first couple would jolt bigoted Republicans out of their ignorance. (Is there a more childish, naive view of the tenacity of racism  than the oft-repeated idea that we can fuck ourselves into bonhomie?)  Lots of black folks have gotten the “twice as good” speech from their folks: Obama referenced it in his commencement speech in Morehouse in May; it’s the title of Marcus Mabry’s very good biography of Condi Rice. Papa Pope’s reference here was obvious, but it felt less like a stretch than the show’s other acknowledgments of race.

But are we gladiators or are we bitches? (This is an honest question. My wardrobe choices going forward are contingent upon your answer.)

I think you may have answered your own question regarding the Papa Pope lecture. Because that “twice as good” ideology is part of so many black families’ realities, it’s a more organic, believable exchange than say, “I don’t want to be your Sally Hemings” (a reference that was only used as a direct rebuttal against multiple blogs that had raised the comparison).

The mention of race at all is a departure for Shonda, whose world-building trends toward racial silence (or, at least, away from race as such an overt part of her shows’ discourse). Race wasn’t addressed at all in Scandal’s first season, and I think its appearance in subsequent episodes is in response to deafening online discourse around it.

I’m glad it’s being raised here, I guess. Though always notably multiracial, none of Shonda’s other shows have ever been anchored by a black star. Any show that refuses to address race after casting a black lead — presumably asserting that casting black is the address (and the only necessary one) — is limiting its narrative possibility. Especially in our current political climate, race has asserted itself as a huge deal. Still. It would be disingenuous and strange to keep ignoring it here.

But I agree with you that most attempts to address it have been very clunky and that Papa Pope’s is the best of the lot.

Speaking of him, much has been made of the way Liv flinched when he went to touch her face in that scene, suggesting that he may not only be a verbal abuser but a physical one as well. The writers seem to underscore that when Liv stands up for herself later, responding to his warning that, “[the White House] would destroy her” with, “That’s what mom always said about you.”

It’s taken us two full seasons to get any substantial back story on the main character of this show (which is crazy, when you think about it). But I’m very interested to see what Liv and Papa Pope’s sparring reveals about how she became this quivery-lipped control freak to begin with.

For me, the strength of Scandal has always been its relationships (with the exception of Liv and Fitz’s, which just makes me really uncomfortable all the time). So I’ll leave readers to speculate about what’s in the file Cyrus saw and to discuss the plausibility of framing ol’ girl as the president’s mistress.

The last thing I want to say is: what is the deal with Harrison? He’s so weird, right? All these intense, quickly delivered diatribes that have (mostly) stopped yielding him the desired results, all this presumption about his closeness to Liv… he *does* know that Huck is Olivia’s constant, right? He does realize that she never confides in him or trusts him with anything much or listens to his long-winded hot air ego trips, yes? What’s his motivation? We’ve been speculating about him since episode one. Is he in love with Liv? Just beholden to her? A long-lost half-brother as yet unrevealed to us? I don’t understand him. Some context would be nice.

The rest of Liv’s Scooby gang also still annoys me. I’d be fine if she downsized her whole operation and just worked out of her bedroom, brainstorming with Huck under a comforter.