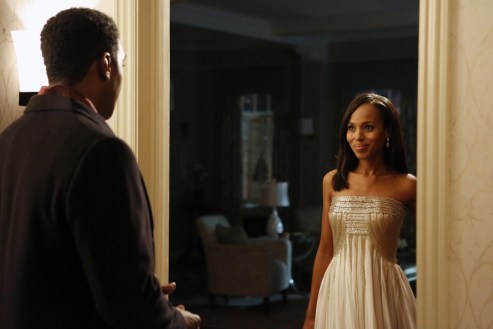 Sorry for missing the recap of the last ep. Where were we?

When last we kicked it with Olivia Pope and associates, the man Fitz had defeated for the White House had concocted an elaborate, extemporaneous plan to murder his way into the presidency he was so cruelly denied. (Yes to everything you’re thinking, y’all.)

Since then, the show’s dug a little bit into Huck the Deus Ex Machina’s backstory with an odd little plot about his old running buddies, a bunch of highly trained secret government assassins who are called in from the cold because of some McGuffin. Because Scandal is Scandal, all those superspies end up in a conference room with their guns drawn on each other and waxing verbose their innermost motivations, and it takes a speech from Harrison about Olivia’s awesomeness and how she has everything under control to keep them from shooting each other up. Yes, that’s right: there are top-secret spy machinations going on that only Olivia can set right, because she’s an ecru-clad Batman!

But that’s all the time we should spend on that ep, which didn’t really move the ball on anything, because Scandal’s writers went ahead and shot President Fitzgerald Grant.

laura and I joked that a presidential assassination attempt was in the offing, because it’s the kind of Big Dramatic Plot Twist that Scandal’s writers can’t help but avail themselves. I’ll cop to being legitimately shocked the moment it happened, but almost as soon as it was over, all of the frayed edges of the plot threads that got us to this point started to show.

The Twitterverse read Mellie’s last-second suggestion that she and Fitz ditch the gala — after he tells her that he’s no longer dealing with Olivia — as a sign that she was trying to prevent him from getting shot. That seems about right, but wouldn’t she put up more of a fight? (Something like: “No, you really, really shouldn’t get out of this car, and I can’t tell you why, and I know you don’t trust me, but you have to trust me here.” That would at least get his attention.)

But let’s say Mellie is in on this assassination plot. What does she stand to gain by having Fitz killed? And how does it relate to her role in the Secret Conspiracy Whose Revealed Purpose Will Ultimately Disappoint Us?

Regarding the scandal of the week: Olivia’s declaration that Harrison can handle the mess about the billionaire who has lost his mind and angered his family was basically the show declaring that this plot doesn’t really matter. I spent most of it thinking that there’s no point of being a billionaire if you can’t drive a motorcycle through the foyer of your mansion. Looks to me that he was doing rich right! If I was that rich I’d graft a narwhal-horn onto a Clydesdale’s forehead and ride around Brooklyn on my Gully Unicorn. If rich is just sitting on boards and getting hospital wings named after you, count me out.

This story basically seemed to be a vessel for a telegraphed subplot about how Harrison was originally sent by Olivia to keep Abby and David Rosen apart but is actually develops genuine feelings for her. Oh, no! What will happen when she finds out that Harrison has really been lying to her? (I, for one, will continue to give zero damns.) But I am really curious as to what you think about the show’s treatment of Abby’s survival of domestic abuse. Lindywasp made the excellent point about this show’s somewhat bizarre politics when she noted that its heroine is someone who basically uses the broken people indebted to her to fix the problems of her extremely rich and powerful clients.

Also, Quinn pointedly confronts Deus Ex Machina about his role in whatever got her to where she is now. Harassing a bloodthirsty trained killer while he’s trying to eat his sandwich seems like breathtakingly bad judgment, but okay. Quinn thinks he was in on the plot to kidnap her — on the Supreme Court Lady’s private plane — and his face gives away that she’s on to something. Again, gor a trained spy, Deus is supremely bad at protecting secrets.

I didn’t even get to Olivia’s new #SenateBoo, but come on. This dude is so obviously a placeholder and a plot contrivance. The show doesn’t take him seriously as a suitor for Olivia and neither should we.

What do you think of the stolen election subplot? I think it has some potential, but like so much about this show, it would work even better if the writers didn’t try to get to all the plot points in such ham-handed, devil-may-care fashion. Nevermind that Cyrus’s husband would never be allowed to cover the White House by his paper because of the obvious conflict of interest, or that Cyrus’s inability to keep his husband from sniffing out information that could bring down the president brings up some questions about his political competence. If it was that uneasy to uncover the damn rigged machines, why hadn’t someone else uncovered it already?

Notes from a scandal:

Lemme backtrack to the previouslies for the sisters out here: in your haste to cover actual plot points, you extracted all the juicy subtext we read for: a.) Harrison’s “What do you need?/We family, girl.” speech had women’s flanks aquiver; Edison, Liv’s rebound man, pointed out to her that he should have bedroom access because of their relationship history, which included him “watching her press her hair” (thereby setting off a buzz among Team Natural about Liv’s true hair texture); and then, chicks kind of lost their minds when, in that episode’s final moments, Edison showed back up at Liv’s door with DVDs and groceries, saying “Let me in. Because I am a man, and I don’t play games.” Access: granted. Boots: knocked.

Now. Back to this week:

G.D., I’m glad you covered both scandal-of-the-week and Quinn’s Pointless Subplot of Possible Domestic Terrorism. I paid attention to neither.

What I am sitting up straighter for each week is Columbus Short’s steadily increasing screen time. Sometimes, Shonda has a meta way of dealing with cast problems (i.e. character-assassinating Dr. Burke as a parting jab at Isaiah Washington before his infamous firing from Grey’s; or killing off unlikable or extraneous characters instead of leaving the option open for them to return to the show later). This has never been truer than in the case of Harrison: after a season and a half of having him do nothing more memorable than recruit Quinn with that Gladiators-in-a-Suit spiel, here the writers are, stepping up his game while simultaneously giving him dialogue that acknowledges the late pass. Women viewers are grateful for it.

G.D., I know you’ve said that he still has pretty anemic character development, and I agree, but it’s clear, he’s up for the gig of becoming Liv’s new righthand and confidante, following the departure of Steven (Henry Ian Cusick, we hardly knew you!). As a longtime Short fan, I’ve been rooting for him to get a role that showcased his range in a way that would finally elevate his star status. He’s been doing yeoman’s work in middling action flicks for a while now, but this role is a thing apart. They’re giving the opportunity to serve us romance, intensity, intellectual prowess — and when they give him a back story, even if it’s wack, he will finesse the hell out of it. I think stepping him up as a character will have long-term payoff.

To address your domestic violence point: on a moral repugnance scale, exploiting Abby’s battered spouse past is a 10. Just gross. Also: Rosen’s supposed to be Liv’s friend. Just how much more does she intend to screw him over? Was there no other way to split them up?

Now, onto the last-minute twist: when I tell you I was 0 for 3 in my assassination predictions…

I thought it would be Cyrus’s husband, the intrepid, unethical reporter; Edison (because of the Prez pining over post-coital photos of him and Liv and also: black majority leader); or Foghorn Leghorn, the Illuminati mastermind. Any of those would’ve made more sense to me than POTUS himself, who hasn’t even been on screen in two weeks. As a Shocking Plot Twist, I don’t like it. And as a logical progression, I don’t like it — especially with Mellie’s way too on-the-nose foreshadowing.

But this is what we have, so let’s roll with it. Next week: sobbing Liv in a gorgeous gown at a hospital (a Shonda staple), yellin’ Mellie, and lots of red herring suspects. Let’s go!

Notes on a scandal: