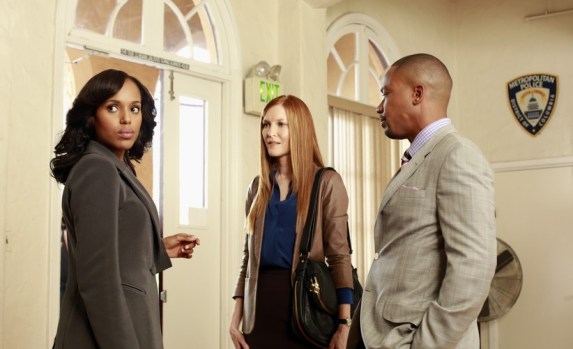 In the opening scene of last week’s Scandal, the President of the United States is sleeping on a couch. Why is he sleeping on the couch? Presumably because it’s a universally understood shorthand for marital discord, even though the White House residence has other beds in it. Nine other bedrooms in fact, according to the pregnant First Lady, who uncorks some early morning contempt and sprays it his way. He shouldn’t sleep on the couch in their future baby’s nursery, but he can’t share a bed with her, she says, because he gets boners in his sleep while he dreams about Olivia Pope, whom he presumably did sex to. You know, in case anyone missed the point.

Disclaimer: I’m recapping this more or less cold, having never seen an episode of Scandal before last Thursday’s, so all the soap-y exposition and underlining of that exposition helped me get reasonably up to speed. All I know is that once a week, my Twitter timeline is overrun by OUTRAGE and SHOCK and “I am here for Olivia’s suit!” My homie Akoto astutely pointed out that even while this running commentary seems tinged with some ironic distance, it has a different tenor than the regular hate-tweeting that accompanies, say, The Real Housewives of ______.

And I get why people ride for Scandal. Everyone likes Kerry Washington (although my feelings toward her are complicated by the fact that she’s been trying to trap me with a baby for years). And of course, she’s a black woman who is the lead of a primetime network drama — which hadn’t happened in three-and-a-half decades prior to this show — that also happens to helmed by another black woman and manages to still do solid Nielsen numbers. (It was the third highest-rated show among black folks last week, after Sunday Night Football and 60 Minutes.) That this show exists and is thriving is an accomplishment on par with electing a Negro to the Senate. So, yeah. ‘Scandal’ manages at once to be both a B.F.D. and, if this episode is any indication, colossally, eye-rollingly preposterous.

Anyway, this episode. I have questions. Why would the family of a missing young woman contact a “crisis management” firm? Why would the head of said crisis management firm be in the woods ID’ing a body (in heels, no less)? Why would Olivia and her underlings be in the autopsy room? I asked folks on Twitter what exactly it is that Olivia’s firm does, and folks said something about “white hats” and “dark hats.” (Um, thanks, guys.) The specifics of the missing-lady case — the fact that she was likely killed by some foreign mucket-y muck who has diplomatic immunity and how it could hurt relations with “East Sudan” or whatever — don’t really matter, since it’s just perfunctory noise to get Olivia and the president in the same room. (Not that his schedule is that busy. POTUS seems to have a lot of time to stare contemplatively out of windows.)

More questions: are we supposed to be rooting for Olivia and POTUS to find a way to be together? Because while that outcome seems completely implausible, all the star-crossed lovers talk seems like it will get old real fast. (Seriously, when The Old Sage Supreme Court Justice Lady says to Olivia, “I see you two together, you breathe in sync,” I was finna abort this whole undertaking.) It’s just too ridiculous a storyline to be sustainable for too many seasons. I’ve gathered that this is the show’s central tension, but this is my first ep, so I’m not invested in their tortured little dyad. Are you, regular viewers?

There’s some intrigue-y stuff involving a powerful oilman named Hollis. Or at least, I’m assuming he’s an oilman, since he has a gold-plated model of an oil derrick on his desk and all the cartoonish accoutrements, like a folksy twang and the head of an elk on his wall. In my head, he’s chomping on a cigar, leaning back in his chair and kicking his big cowboy boots onto his desk with his ankles crossed, although I’m pretty certain that didn’t actually happen. David Rosen meets with Yosemite Sam in order to ask questions about some shadiness. Judging from the way Yosemite Sam’s poker face falls apart — subtlety! — we know he’s hit on something.

The First Lady is erupting at folks and yelling about being surrounded by incompetents. She’s resentful that she had to do some First Lady-ass something or other for some stupid kids and their stupid parents. And in every scene she has with the president, she basically tells him, unprompted, that she wishes he would die in a fire. Is she too broadly drawn? Put it this way: would it be surprising to anyone if she ends up giving birth to a shadow monster that stalks the night and kills Renly Baratheon?

The FLOTUS is hard for me, y’all. We’re supposed to believe she’s a shrewd manipulator even though her only weapon seems to be…haranguing people? Then she reaches out to Olivia, whom she understandably hates, to agree to fake-demand the dead lady’s killer be brought to justice? I wasn’t clear about why this was such a brilliant tactical move or what it accomplished. I’m sure I missed a detail about why, exactly, it was bad for the president. But he basically said, my wife and my side jawn are plotting against me and it was bad for me, so I guess that’s the important takeaway. But the lady in the FLOTUS role goes hard with her scenery chewing. Respect.

Meanwhile, Abby, who works for Olivia and looks kind of like Donna Moss, is upset that the closed-off Olivia just isn’t letting her in and sharing her secrets. (Some help here folks: is there a reason why Abby thinks she’s entitled to be Olivia’s confidant? She’s your boss. Fall all the way back.) I love how they illustrate to us that Olivia has a lot on her mind, by having her pace her office ostentatiously, and getting her coworkers/underlings say to each other that she’s pacing because she’s got a lot on her mind. The snooping David happens to be Abby’s new boo, and he has a wall covered with pictures of her and important-looking papers, a la Lester Freamon, because this is Hollywood code for “meticulous obsession.” There’s some sinister plot that he thinks Olivia’s at the center of, and he’s going to get to the bottom of it! But David’s assistant tells him that if he doesn’t want to spook his new lady, he would do well to make sure she doesn’t see his conspiracy-nut diagramming. That exchange is overlayed with Abby breaking into his apartment — he’s not telling me everything! — and discovering it. Abby wants answers. But David should want answers too, like, the reasons why this nosey-ass lady burgled his fucking crib. (And I feel you, David: I have a giant wall in my bedroom dedicated to Kerry Washington, too.)

The president arranges a meeting with Olivia at “their restaurant.” The place empties out as the Secret Service files in, and he appears at her side and sits down. He tells her he can’t do anything with the foreign muckety muck killer, and that his hands are tied. He then apologizes for loving her — which, GTFOHWTBS — and asks her to travel with him to the G8 Summit aboard Air Force One. She rebuffs him, because WTF? Then he’s like, I’m letting you go, I need to be a better husband and father and president and this isn’t right. Okay, the president is a dick. Just a second ago he was trying to leave the country with her and now he’s getting all sanctimonious?

Yosemite Sam is presiding over a meeting of some kind of Council of Evil: the Supreme Court Lady, Cruella de FLOTUS, the president’s chief of staff, and — shocker! — Olivia Pope. “We have a David Rosen problem,” he says to the assembled. This seemed to be a big reveal that caused Twitter to explode. What problem would possibly require this particular assortment of folks to fix it? Whatever it might be, I’m certain it will be completely ludicrous.