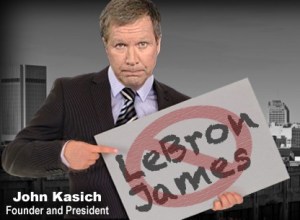 As it happens, one of the few men in Ohio with an approval rating that rivals LeBron James‘, celebrated the end of the NBA Finals by declaring the Dallas Mavericks “honorary Ohioans.”

But instead of feting honorary Ohioans, seems like Gov. John Kasich would be better off concerning himself with real Ohioans.

You know, Kasich is almost certainly one of those LeBron haters who woke up the day after Game 6 with the same problems as the day before. And, per James’ advice, he better start dealing with them.

Now for some randomness. If only for a few hours:

1. Despite making it through both (overwhelmingly Republican) Florida state, house, Florida Governor Rick Scott vetoed a budget that would have provided $500,000 to treat agricultural workers living and working near Lake Apopka, the state’s most polluted lake.  The state spent $1.5 million to study deaths and illnesses in birds in the area. (Nicole)

2. Unfortunately, Rep. Gabrielle Giffords is still not ready for a return to Congress. (Blackink)

5. In Illinois, Catholic Charities is ending its adoption and foster care programs. CC refuses to serve LGBTQ families, and rather than face state sanctions, CC is shuttering the programs. (Nicole)

6. Yet more fallout from Hurricane Katrina: the neighborhoods of New Orleans are more segregated than they were a decade ago. (Blackink)

7. ‘Gay Girl in Damascus’ blog, supposedly the musings of a Syrian lesbian, is a hoax, written by a white American male. (slb)

8. “Where the market once helped investors and companies, now it’s failing both.” Or, more precisely, the stock market is for suckers. (Blackink)

10. Johannes Mehserle, the BART officer who shot and killed Oscar Grant, was released from prison after spending 11 months behind bars. Mother Jones‘ Hamed Aleaziz puts that sentence into perspective. (Blackink)

11. Among many other less-than-ideal consequences from oil extraction in the Niger Delta, there are gas flares visible from space. (Nicole)

14. I know we’ve told you a million times, but you’re listening to “RadioLab,” right?  The inaugural episode of season 10 will sour you on online dating and completely creep you out, in the best possible way. (Nicole)

15. Parents, don’t you want to send your children to Tea Party summer camp in Florida? (Blackink)

17. The Onion’s AV Club is rewatching “Avatar: The Last Airbender.” You should too. (Monica)

18. One of the best food writers around, Tom Philpott, has moved from Grist to Mother Jones.  Adjust your RSS feeds accordingly. (Nicole)

19. The fascinating oral history of the rise and fall of The National, a short-lived but highly regarded daily sports newspaper. (Blackink)

20. One of LeBron’s most notable critics, Friday Night Lights author Buzz Bissinger, finds it absurd that James – whom he collaborated with on a book a couple years ago – is now the most hated athlete in sports. (Blackink)

Ok. Sure, LeBron left Cleveland. But Northeast Ohio will always have this.

If you’ve got links, comments, complaints or unending praise, drop’em in the usual spot.

Until then, more later. Much more later, actually.