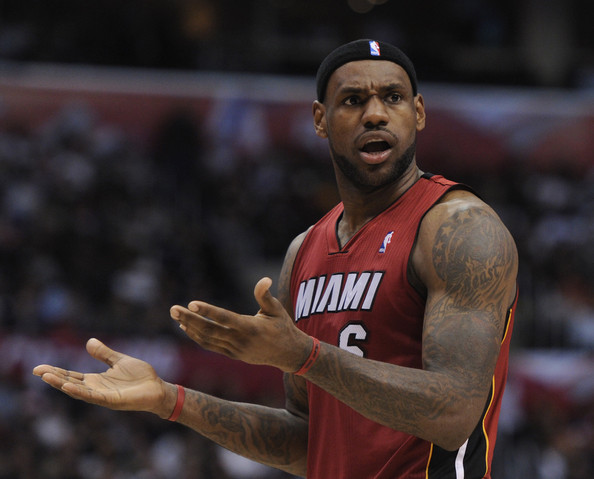 “[At] the end of the day, all the people that was rooting on me to fail, at the end of the day they have to wake up tomorrow and have the same life that they had before they woke up today. They have the same personal problems they had today. I’m going to continue to live the way I want to live and continue to do the things that I want to do with me and my family and be happy with that.

They can get a few days or a few months or whatever the case may be on being happy about not only myself, but the Miami Heat not accomplishing their goal, but they have to get back to the real world at some point.” – LeBron James during the post-Finals press conference.

Are you one of the millions of Americans who were thrilled that LeBron James failed to get an NBA Championship ring?  Did you celebrate on Twitter or Facebook like the evening we found out Navy SEALS killed Osama Bin Laden? Was the hope of seeing James fail the only reason you were even watching the NBA Finals?

Even though I was openly rooting for James and The Heat in the Finals, I really didn’t care if they won or they lost.  (When my friends asked why I wanted the Heat to win, I would reply, “Because it would make white people in the media really angry.”)  But as it became clear that the Heat were going to lose, it wasn’t just white people who were rejoicing. Everyone outside of South Beach was ecstatic.  Every Facebook status and Tweet was directed at LeBron.  Instant memes sprung up on the Internet.  I’m not saying that I’m above irrationally hating a player (I hated Kobe Bryant for a little bit after that Colorado incident) but something about this made me uncomfortable.

I hated “The Decision” and the preseason Miami celebration like everyone else,  but it didn’t bother me that much.  Yes, he left the Cavaliers to team up with friends in Miami.  He’s not the first free agent to leave the team who drafted him for greener pastures (Shaq left the Orlando Magic to win titles with the Lakers and the Heat).  This isn’t the first time players teamed up to try and get a ring (Kevin Garnett,  Ray Allen and Paul Pierce in Boston, Shaq, Bryant, Karl Malone and Gary Payton in Los Angeles, Hakeem Olajuwon, Clyde Drexler and Charles Barkley in Houston). I’m not sure what Wade, Bosh and LeBron were supposed to do to make this seem like “the right way” to everyone.  They took less money to team up and to re-sign Udonis Haslem. They struggled early only to come together in the playoffs and fall just short.

What is it about James that makes people want to seem him fail?  Why have writers like Yahoo! Sports Adrian Wojnarowski dedicated their lives to tearing him down?.  Why is LeBron James somehow more arrogant than Jason Terry and DeShawn Stevenson? Why is LeBron James so bad that everyone decided that Mark Cuban was the lesser of two evils?

I’m not ignoring how poorly James played in the Finals, but this celebration of failure goes beyond that.  At halftime of game six, the Dallas Mavericks’ star Dirk Nowitzki was an abysmal 1 for 12 from the field.  But the first thing that they talked about was  James’ shot chart and how he was “only” 5-9.  Really?  That’s the bigger story right now going into the break? Even the broadcast was feeding into the narrative.   David Stern may not have liked “The Decision” but the unifying hate for James is the best thing to happen to the NBA since Michael Jordan.  The Finals enjoyed the best ratings in the last 11 years.  Even casual fans had a rooting interest in this series: Not LeBron James.

In the last week, I’ve been trying to figure out what is say about everyone that they wanted LeBron James to fail.  Last night, realizing that I was clearly in the minority, I’m beginning to wonder what it says about me that I wanted him to succeed.

Sean Campbell blogs at Don’t Cross the Streams at Melanism.com.