Home » Browse PostBourgie » Food Deserts Are Not a Myth.

Food Deserts Are Not a Myth. 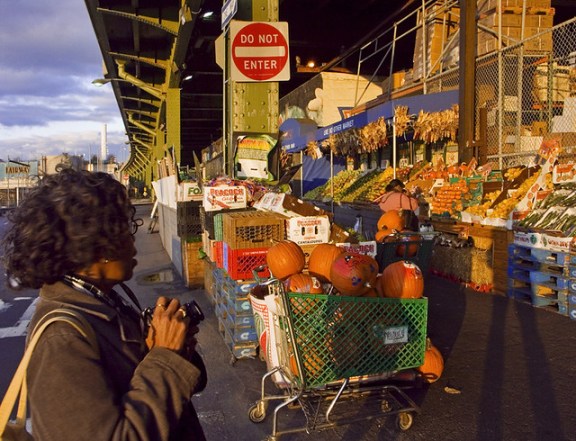 Part of the Fairway wholesale foods market under the Joe DiMaggio (West Side) Highway in West Harlem, NYC. via gaspi yg, via CC 2.0.

Sigh.  I’ll try and keep this brief, because we could be here for days.

In his piece for the Root, McWhorter argues that food access is not really a problem, and that it is not related with obesity levels.  He picks the West side of Harlem as his proof (emphasis mine):

Specifically, we are taught to think that the black obesity problem is in large part a matter of societal injustice. The story goes that the rise in obesity among the poor is due to a paucity of supermarkets in inner-city areas. This factoid has quite a hold on the general conversation about health issues and the poor, for two reasons. One is that it sits easily in the memory. The other is that it corresponds to our sense that poor people’s problems are not their fault — which quite often they are not — and that reversing the problem will require undoing said injustice.

The trouble is that it is impossible to truly see a causal relationship between inner-city obesity and the distance of the supermarket when you live, for example, in New York.

Wrong, wrong, wrong.  Actually, there’s a lot wrong there, but let’s start with the bolded statement.

While I am delighted that West Harlem has a large and affordable supermarket, that bit of cherrypicking actually refutes McWhorter’s point. (Although affordability is debatable, that particular congressional district, NY-15, has a 21.8% food stamp participation rate, with the average household monthly benefit of $267.54.  But I digress.)

I’ll lay it out for him.  Obesity (along with hunger) is dramatically higher among poor communities.  And guess what?  If you are poor, your access to affordable, nutritious food is more likely to be limited.  In fact, this is such a problem in New York  that the city’s Department of City Planning  even commissioned a study documenting the  extensive lack of supermarkets in New York. The study singles out neighborhoods like Central and East Harlem (hmm, wonder why McWhorter went with West Harlem?) in Manhattan, Bushwick and Bed-Stuy in Brooklyn and almost all of Queens for lack of accessible grocery stores.  And let’s not forget the next congressional district over, NY-16 in the South Bronx.  As I’ve mentioned before, the South Bronx has the distinction of being one of the poorest, most obese, and most food insecure (40% of residents particpate in the food stamp program) communities in New York, and in the country.

There’s also a larger and more disconcerting problem with McWhorter’s argument.  He says:

The no-supermarket paradigm discourages us from considering that human beings acquire — through childhood experience, cultural preferences and economics — a palate. Note that the economy is part of the equation: The cheapness of sugary drinks is notorious, thanks to the popularity and influence of the muckraking 2008 documentary Food, Inc. and Eric Schlosser’s best-selling book Fast Food Nation, which was made into a movie in 2006.

Culture, too, creates a palate — and to point that out is not to find “fault.” Example: Slavery and sharecropping didn’t make healthy eating easy for black people back in the day. Salt and grease were what they had, and Southern blacks brought their culinary tastes North (Zora Neale Hurston used to bless her friend Langston Hughes with fried-chicken dinners). Fried food, such as fried chicken, was also easy to transport for blacks traveling in the days of Jim Crow, when bringing your own food on the road was a wise decision.

As quadmoniker has mentioned before, this country suffers from “a fundamental misunderstanding of what the word culture means and how culture arises“, particularly when it comes to nonwhites, and McWhorter should know better than to use it as justification for acquiring tastes.  Furthermore, science tells us that it’s not just black people that like salty, fatty, sugary foods — we’re all biologically predisposed to go after those foods, a vestige of our days as hunter-gatherers with unstable food sources.  Using culture to justify a like of fried food is not only lazy, it’s just not true.  And again, McWhorter illustrates my earlier point.  Know why “slavery and sharecropping didn’t make healthy eating easy for black people”?  Because slaves and sharecroppers lived in poverty.  And in case you missed it earlier, poverty makes it hard to eat a healthy diet.