Home » Browse PostBourgie » Famine in the Horn of Africa.

Famine in the Horn of Africa. 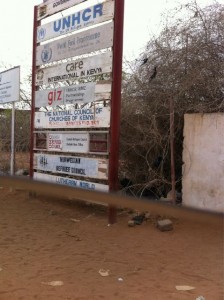 Between Anderson Cooper, Bono, and the New York Times deigning to (at least briefly) put a story about famine on the front page, it seems the world has finally taken notice of the unfolding disaster in the Horn of Africa.

It is about DAMN time.  The US Agency for International Development (USAID) created the Famine Early Warning System (FEWS) in the wake of famines in Ethiopia in 1984-85, in an attempt to predict future famines and mitigate their impact.  Unfortunately, all the alarms in the world do no good if no one is paying attention when they go off.  Since January, aid agencies on the ground have cautioned that failing rains could mean drought and famine for a huge swath of people in East Africa.

Which brings us to today.  The rains did fail, and the current drought is the worst since 1950.

Famine is not a word thrown around lightly in the humanitarian sphere.  Much like “genocide,” there are  specific metrics that have to be met for an incident to qualify.  In the case of famine, the UN has three concurrent conditions that must be met:

In some areas of Somalia, including parts of Mogadishu, the death rate for kids under 5 is 13 per 10,000- roughly the equivalent of ten percent of kids under five dying every three months.

Somalia is far and away in the worst shape, particularly southern Somalia — the area not-so-coincidentally controlled by the Shabab, an al-Qaueda affiliated group the U.S. classifies as a terrorist organization.  Thankfully, the Obama administration relaxed its sanctions against the Shabab. Humanitarian organizations often have to bribe the militias to gain access to the areas they control, and without relaxing the rules, those same organizations could be prosecuted for giving material support to terrorists.  This is not unilaterally good news though.  In an effort to eliminate all Western influences, the Shabab have gone so far as to kill aid workers and refuse Western food humanitarian assistance.

Right now, there are roughly 12 million people in need of immediate assistance.  Some have made it to refugee camps in Kenya (Dadaab) and Ethiopia (Dollo Ado).  Many others have not been so lucky.  With their own levels of hunger rising, Kenya and Ethiopia are not necessarily in the best position to provide food, medical care, and shelter for the refugees that do make it over the border.

Meanwhile, back in the US, the Republican-controlled congress is still trying to severely cut, if not outright eliminate, funds for emergency food aid.