Home » Browse PostBourgie » $8 Eggs and the Cost of Food. 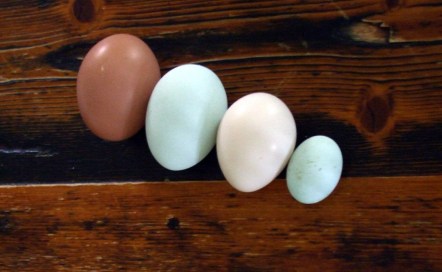 Jane Black wrote a piece recently for the Atlantic discussing the price of eggs at her local farmers market (emphasis mine):

My first instinct was that the egg guy was gouging people, like me, who have enthusiastically embraced efforts to build an alternative to our industrial food system. But it turns out that’s what it costs him to produce his eggs. The farm, Grazin’ Angus Acres, follows the gold standard of environmental practices: each morning, the chickens are fed organic grain, then moved to fresh pasture in a specially made chicken mobile. Owner Dan Gibson says the process is so labor-intensive that bringing down the price would be near impossible—and he’s not interested in trying. “At eight dollars a dozen, you pay 67 cents an egg,” he told me. “If your priorities are in the right place, that’s a bargain.”

The food blogosphere exploded, and I’d like to pull out one response in particular, from Michele Simon at Food Safety News:

That’s exactly why instead of fretting over the high cost of organic eggs we should focus on changing this bigger picture, which also involves many complex and challenging policy changes. Then maybe we would make some progress toward shifting the American diet to health-promoting, disease-preventing plant-based foods. Just like things used to be.

I think Simon misses the point entirely. Yes, we should encourage people to eat less meat, and make the meat they do eat of a higher quality. But that is a massively long term project, much like dismantling the subsidies that make industrially produced meat so cheap in the first place (something Black points out in her piece). It took time for the American diet to shift from meat-as-a-treat to meat-and-three, and I don’t think it’s unreasonable to think it will take time to shift back (arguably, that time might be a luxury we don’t have, but that’s for another day)

In the interim, there is an immediate problem- there are lots of people who want to eat better, but are priced out of doing so. How do we fix that?  The answer is not “buy $8 eggs or don’t eat them at all,” as some would have you think- that’s exactly the kind of thing that allows people to marginalize the movement towards better food by calling it elitist.  In his response, Tom Philpott pointed out that there are ways to raise food that aren’t as disgusting and dangerous as our current system.  Black took to her personal blog to defend her piece (emphasis mine):

Any suggestion that good food could be convenient ruffles feathers. The message: Anyone who doesn’t get that food should be a top priority — in terms of money and time — just doesn’t get it. Well, a lot of people don’t get it. And I still want them to support farmers that are good stewards of the land and eat healthfully.  The goal of food reform should be to make it easy and affordable for everyone to eat well.

There are many, many people out there, of varying socioeconomic levels, who are worried about what goes into their food.  A one size fits all prescription (“eat less meat” or “go vegan“) removes any incentive to bring more people into the movement (the food movement big tent: we have catering, and it is tasty!)- you either care about it and don’t complain, or you don’t care enough, and can go back to your wasteland of McDonalds and Chinese takeout.  To put it bluntly, “it’s not that we don’t care or understand, it’s that we’re poor.”