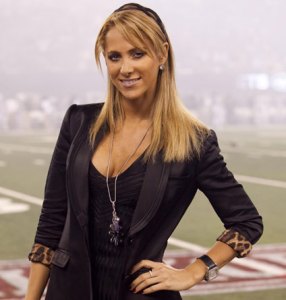 More outrageous than a swimsuit model-turned-TV sports reporter wearing tight jeans, or the boys-will-be-boys defense that has prevailed in recent days, or disingenuous conversations about fashion choices, are the numbers.

Or rather, the absence of the numbers.

I’m talking about estimates showing that only 5 to 15 percent of women who are sexually harassed in the workplace formally report the harassment to their employers or agencies like the EEOC. On college campuses, the number is thought to be about 10 percent. If you believe those statistics, that means an awful lot of women are suffering in silence.

It’s not hard to understand why in the wake of allegations that TV Azteca reporter Ines Sainz was harassed at the New York Jets’ practice facility Saturday. The details are in the links, for those who are interested.

But essentially: Sainz, a former Miss Spain and Miss Universe contestant* who has referred to herself as the “hottest reporter in Mexico,” was allegedly subjected to taunts, catcalls and other juvenile antics during a visit to the Jets’ facility for an interview.

If they even bothered to be that high-brow. Here’s a sampling of some of the headlines that popped up in my Google Reader: “Is It Really Sexism If She Was Sorta Askin’ For It?”; “Jets Are in Trouble For Sexually Harassing Mexican Ass Sensation Ines Sainz”; “Ines Sainz’s inviting rack makes appearance on Fox News.” The analysis that followed was about a nuanced as you might expect.

And that didn’t even include a bizarre tangent from well-known Washington Redskins running back/clown Clinton Portis who mused – and later apologized – that female sports reporters would find “somebody got to spark her interest” in the locker room” and that “I don’t know what kind of woman won’t, if you get to go and look at 53 men’s packages.”

I assume that means Portis has never met a lesbian, eh? To say nothing of people who manage to put aside their peeper tendencies and manage to work in spite of all the inviting penises around them.

But more important than all of that, over and over again in the past few days, I’ve read and heard people suggest that Sainz brought the harassment upon herself by provoking the players with her outfit and, I suppose, her pulchritude.

Some of the most offensive takes on the incident came from about where you’d expect:

NFL Hall of Famer John Riggins: “It’s just the animal instinct. If you’re putting it out there, these guys are sensitive. And I’m sorry, maybe she’s so hot she can’t help it. But you know what? Then put on a cardboard box, OK?“

Columnist Jason Whitlock: “You send a ‘sex symbol’ into a locker room and then act shocked that 20-somethings treat her like a sex symbol. Give me a break.” … “You cannot take the MEATHEAD out of football. Will never happen. 20-somethings playing a game we want to act like 60 yr olds. Please.”

Blogger Thomas Kinslow: Let’s be honest: Ines Sainz is a very pretty woman who does fluff pieces to get her on the camera and get ratings up. When part of your job is groping men’s arms for a story, you put yourself in a position where, unfortunately, these types of things can happen. Maybe Ines should focus on the actual games instead of the size of athletes’ muscles.”

What we’ve got here is a classic case of victim-blaming. It’s one of the most basic calls in the sexist’s playbook.

The implication is that anyone dressing in a manner that others deem unprofessional deserves whatever harassment comes their way, and it’s only natural because men – especially athletes – are incapable of controlling their sexual impulses. These men are MEATHEADS and they will act accordingly, so the women best comport themselves like ladies and dress accordingly so as to avoid harassment.

Whenever a woman is sexually harassed, the conversation inevitably turns to how the victim did wrong, looked wrong, dressed wrong, reported wrong, made her career wrong, and navigated a man’s world wrong. The point is moot.  Sexually harassing Ines Sainz makes sports reporting an unwelcome place for all women in the business, who must constantly navigate intense scrutiny of their looks (too hot, not hot enough), their clothes (too feminine, not feminine enough), their demeanor (too flirtatious, too humorless)—basically, their gender.

Men, especially, have a choice in this matter. It would be much easier if we held ourselves (and our friends and colleagues) accountable for treating all women – no matter how they’re dressed – as if they’re deserving of our respect.

We shouldn’t harass a woman in a strip club, let alone a night club, newsroom or a locker room. We have to get past this idea that only a certain kind of woman should be subject to harassment.

And on the flipside, we know that it doesn’t make much difference what women are wearing when it comes to harassment. Jezebel recently conducted a poll of their readers to see what they were wearing when they “asked for it”: they heard from pregnant women, a woman wearing a hijab, someone decked out in their Arby’s uniform, etc.

Additionally, I’m a member of the PostBourgie running challenge, which includes an e-mail listserve that covers all sorts of topics, including where to find good running shoes, diet tips, and general encouragement for pushing through the grind. But the thread that resonated most deeply to me was the one where many – if not most – of the women in the group shared their personal stories about literally running into harassment. Their workout gear had little to do with the behavior they’ve faced on the streets, jogging trails and high school tracks all around the country. Friend and blog-cousin Sara Libby even blogged about it earlier this year. They’ve all dealt with dudes who’ve stopped them while running to ask them for their phone number. Guys who want them to know that they’re leering at them. Men who scream all sorts of vile things while passing by in cars.

Shani sort of distilled it all for us: “I think part of it is that when a bunch of immature dudes are together, they just fuel each other. It has nothing to do with you, it’s a performance they put on for each other. And they have no clue what its like to be on the receiving end.”

Further, I don’t want to create this slippery slope where it’s up to each individual man to determine whether or not a woman is dressed inappropriately enough to harass. Where and when will each person set that bar? A bikini at the beach? A sports bra at the gym? A short skirt at the grocery store?

A little closer to home, some of you know that I got married six months ago. What worries me about this backlash is that apparently there are some assholes out there who have a very low bar for respect and might feel emboldened to harass my wife for merely offending his sexist sensibilities.

Most importantly, I would want her to feel comfortable enough to report that sort of behavior. But would she?

I don’t know. She tells me that she would but the numbers suggest that she probably wouldn’t.

Silence is the rule when it comes to sexual harassment. And Ines Sainz reminded us all why.

* Sainz has never been a “former Miss Spain and Miss Universe contestant.” A woman with the same name was Miss Spain in 1997, but she is not the same woman. Sorry for the mix-up.