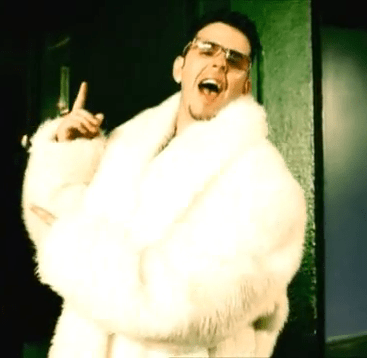 This article was written by seansmyph, co-creator of our blog Splackavellie Central: Ridiculous Moments in R&B and Beyond.  It’s part of a series of posts called “The Worst of MC Hammer,” which is part of a series called “Worst of the Best,” which probably doesn’t make much sense the first time you read it.

The video for M.C. Hammer’s “Get 2 No U” takes place in a club where everyone dances in slow motion. Everyone, except for Hammer. Hammer dances to the beat of his own drummer, and that drummer is apparently on some pretty powerful drugs.

Things to watch for:

0:24 – Faux fur coat? Check! Slicked back hair? Check. Faded sideburns?! YOU KNOW IT! This is the introduction of the guy I want desperately to be Pleasure Ellis. He’s Hitting one of his many long and drawn out falsetto notes.  They get more ridiculous as the song goes on.

0:44 – Awkward dance sequence between Hammer and his love interest. She’s trying to figure out how to dance with him…he’s trying to shake that fur loose off his back…and never the twain shall meet.

0:47 – Hammer says “She be rubbin’ my back, when I’m on my back.”  I’m not sure what that means.  I kind of think it means that Hammer freestyled this entire song, which is a bold move.

1:47 – Hammer starts talking about.. praying?  I think he was having trouble with his conscious after all the the old creepy uncle talk to the young lady and started talking about God. In my head, his wife walked in the room while he was recording this song and he was like, ‘Oh, hey honey! Uuuuuuh… I’m talkin’ about God on this track! Not no girl!  Sexy…Sexy…God! And I want to get to know HIM! Heh heh…see!?!’

2:21 – J.D. Greer starts a trend of singing really loudly in girls faces. A trend that I intend to carry out in my everyday life.

2:39 -Pleasure Ellis over-does everything and sings sooo loud in this girl’s face. He’s out of control!

3:00 -Everyone wants to leave, but Hammer keeps dancing and they can’t go until he finishes gyrating.

3:39 – Pleasure Ellis tells the girl with the big forehead to walk on down a long dark hallway without him while turns and sings himself into everyone’s heart. And he sings….and he sings…and then at 4:11 he hits one of the worst falsetto notes I’ve ever heard. His finger points up…but his voice never quite gets there.

Nothing in this video ever quite gets there.  Nothing does.

*Update: We did some research on Pleasure Ellis.  Turns out he’s not the white guy in the fur coat, as we were hoping but… we’re gonna continue to pretend that he is anyway.  Check out his video “Body Language” which… kind of sounds like “Get 2 No U.”