One in eight Americans — a record high in both raw numbers and percentage of the population — are on food stamps. Many are recent additions due to the recession. Yet food stamp benefits are being reduced to help pay for other recession-fighting programs and secondary food initiatives.

Colorlines reports that some of the money for a $4.5 billion initiative to feed hungry school children with healthy food will come from the food stamp program. Essentially, the new initiative, pushed by Michelle Obama, will feed kids in school while their families struggle to feed them at home on benefits that come to about $25 per person, each week.

It’s obviously important to improve the quality of school lunches for children, and to subsidize healthy food for those who can’t afford it. But choosing between home and school as a place to build better nutritional habits is not appropriate. Ellyn Satter’s Hierarchy of Food Needs pyramid [PDF] has been making the rounds on the Internet for some time now — Racialicious, Jezebel, and Change.org have all riffed on a post by the Fat Nutritionist that seeks to explain why many fat people eat less-than-healthy food, and why poor people are so often overweight. 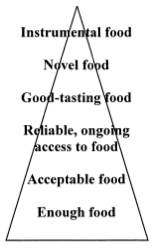 A play on Maslow’s Hierarchy of Needs, the pyramid lists the food needs that must be met before a person can reach the apex: “instrumental food.” Instrumental food is food that’s selected carefully from a variety of available food, has nutritional value and tastes good, and is used to keep the eater both satisfied and healthy. In other words, instrumental food is the food that many middle-class and rich people take for granted.

The bottom of Satter’s pyramid are two words: “enough food.” In a country where excess appears to be everywhere, it’s hard to believe that one in five Americans suffers from “food insecurity,” which is the government’s current term for being hungry. In order to get to a place where people can select food that is both healthy and tasty — and everyone deserves food that meets both of those requirements — they need to start by getting enough food to fill their bellies. Unsurprisingly, that often includes calorie-laden, nutritionally light-weight, cheap, processed foods. The next step up, “acceptable food,” depends a bit on the person, but generally, it’s food that isn’t spoiled, or infested with bugs, and won’t cause illness. After that is “reliable, ongoing access to food.” This is having food security.

It’s only after these three needs are met that people can even begin to think about preparing good-tasting food, working with variety — or “novel” foods, and then making instrumental food choices.

And this is why the recent and impending cuts to food stamp benefits are so devastating. Children won’t learn to eat healthy food if they’re only getting it in school. School food won’t take them through the steps of the hierarchy. Growing up in a home where acceptable, healthy, tasty food is readily available is imperative in the fight against childhood obesity — and it’s something that won’t be possible if the government reduces the already meagre funds that families have to get acquire that kind of food. In an ideal world, both food stamp funding and school nutrition funding would be increased. And yet, as The Washington Post’s Ezra Klein points out, it’s easy to get votes to cut food stamps for needy people suffering in a faltering economy, but nearly impossible to get votes to cut multi-billion dollar subsidies to big oil and gas companies.