Two devastating earthquakes in two months. Let’s hope that our charitable spirit can survive – and then, thrive – through yet another natural disaster: 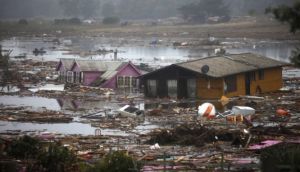 1. Feministing has a brief roundup of links about the situation in Chile, including information about how you can help the people there. Matt Yglesias reminds us that effective government can be the difference in a disaster. And to that point, The Infrastructurist points out that good government means “building codes are far stricter and better-enforced, emergency resources are more available, and the population is better educated as to the safest places to take refuge.” (Blackink)

2. Also on Chile, Dr. Vino’s wine blog lists the vineyards harmed by the earthquake. It may seem trivial, but wine is a big export for the country. Millions of gallons in wine are soaking the dirt. (Shani-o)

3. Is the public option alive again? The number of Democratic Senators are on board with trying to pass it via reconciliation is now at 30, including Dick Durbin, a close Obama ally. (G.D.)

4. Ed Luce of the Financial Times argues against splitting the difference, reminding us that the presidents (FDR, LBJ and Reagan) who compiled the greatest record of bipartisan legislative achievement got stuff done through intimidation. “For all his intelligence, nobody fears Mr. Obama,” Luce writes. (Blackink)

5. Adam Serwer explains that when it comes to race, the South is like a “fun house mirror” for outsiders, who don’t realize that they’re looking at themselves. (Shani-o)

7. President Obama had his yearly physical, and was declared in “excellent health.” But his doctor recommended that he continue his “smoking cessation efforts.” Let’s get it together, POTUS. (G.D.)

8. The NYT has a story echoing Shani’s piece at The American Prospect on the racial argument being made against abortion.  A disturbing quote from the Times story: “‘Before we saw the [anti-abortion] movie, I was pro-choice,’ said Markita Eddy, a sophomore. But were she to get pregnant now, Ms. Eddy said, ‘it showed me that maybe I should want to keep my child no matter what my position was, just because of the conspiracy.'” (G.D.)

9. The Supreme Court is set to hear a change-of-venue case brought by Jeffrey Skilling, the convicted former head of Enron, whose lawyers argue that Houston jurors were too biased to grant him a fair trial. It’s a chance for the court to update their jurisprudence on juror bias; how do you find untainted jurors in Internet age? (G.D.)

10. No means no…unless you’re a man. Here’s an interesting piece on Feministe about sexual assault committed by women and it’s relationship to our ideas about male sexuality. (Alisa)

11. National Journal makes the case for George Wallace as godfather of the modern conservative movement. (Blackink)

12. I really wish they’d called it the latte party instead. (Quadmoniker)

13. More than 10 years after he died in a Texas prison, Timothy Cole may finally receive justice. With a push from the Innocence Project, Cole is set to receive the state’s first posthumous pardon. DNA testing showed Cole was wrongfully convicted in connection with a 1985 rape. (Blackink)

14. Marion Barry, the controversial former mayor of D.C., still holds a seat on the city council. He remains as embattled as ever, apologizing for awarding a $15,000 city contract to a woman he was dating, though he did not cop to breaking any laws. The council will decide this week whether or not to censure him, and the Washington Post has called on him to resign. (G.D.)

16. And while we’re on Detroit, current Mayor Dave Bing is actually looking forward to population decline in a bid to remake the struggling city. Bing “is trying to prepare residents for a new reality: that Detroit—like the auto industry that propelled it for a century—will have to get smaller before it gets bigger again.” (Blackink)

17. Guru of GangStarr is in a coma after suffering a major heart attack. (G.D.)

18. Ta-Nehisi Coates offers up some Marvin Gaye to the commenters who have strayed, post-Atlantic redesign. (Shani-o)

19. In Halifax, Nova Scotia, city officials have finally apologized for destroying a historically black community that was originally settled by freed slaves. Throughout the 1950s and 60s, the city deliberately drove about 400 people from 80 families from the area known as Africaville. (Blackink)

21. Solange – the avant-garde, intriguing Knowles sister – has a new photoblog. Pretty pictures, great fashion, and just all around fun to be had. (Shani-o)

22. Three Word Chant! has unearthed a priceless gem: a Newsweek piece from 1995 listing all the reasons the Internet will fail. (Blackink)

23. Laurence Ross Jr. writes that black Greek organizations thumb their noses at their principles by arguing against Zeta Tau Alpha’s win in the Sprite Step-Off. “…Most of the criticism has been reactionary and sought to deny Zeta Tau Alpha the opportunity to compete based solely on their skin color. By doing that, black Greeks do a disservice to our historic legacy. African-American fraternities and sororities were born in circumstances that sought to combat judgments based on race. And to do the same as those who would deny us opportunity, based on the notion that we’re somehow protecting our black cultural integrity, is morally bankrupt.” (G.D.)

24. Charles Pierce of Slate argues that Canada’s gold-medal victory over the U.S. in hockey redeemed the Vancouver Games. Possibly. At the least, Sunday’s game was the most-viewed hockey telecast in the U.S. since since the Gold Medal Game in ’80. Also, check out the Fourth-Place Medal blog for more from Vancouver. (Blackink)

25. Michael Jordan is poised to buy the NBA’s Charlotte Bobcats, becoming something even rarer than a megarich, global sports icon: a person of color with a controlling interest in a major sports franchise. (G.D.)