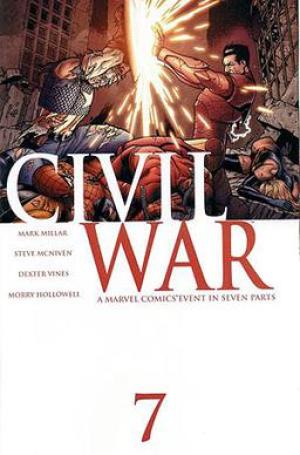 A few years ago, Marvel launched a crossover event  called Civil War that nodded vigorously toward topicality: a massive explosion goes off in Stamford, CT during a clash between a superhero team on a reality show and some super-powered bad guys, in which 600 people — including all the children in a nearby school — are killed. The resulting outrage toward superpowered types brings new calls to pass the Superhuman Registration Act, a piece of legislation that had been floating around the Marvel universe for some time that required folks with special powers to register with (and regulated by) the government. This would result in lots of folks getting their spots blown, as their civilian identities would be known to the government. Noncompliance would be met with force. The fight over the act splits the superpowered community, with Iron Man leading one side arguing in its favor and Captain America on the other leading a band of resisters. A tiny cabal of powerful figures — Professor X, Iron Man, Mr. Fantastic, Dr. Strange, Black Bolt — get together to decide how to deal with bigger, specific threats. (They jettison Hulk into space after his latest rampage kills a few dozen people.)The 9/11 parallels — a massive tragedy that unfolds on television that results in increased scrutiny and profiling of a mistrusted minority group — are hard to miss.

From what I could gather, most of Marvel’s readership was firmly in Cap’s camp. It wasn’t hard to figure out why, since Marvel had long drawn the parallel between mutants and oppressed/ marginalized minorities in real life, and the leader of the side clamoring to leave those minorities alone was literally draped in the American flag. Tony Stark on the other hand, is a callous, billionaire war profiteer who was ready to turn in his friends; Mr. Fantastic, turned on his wife to push for the act and roundup his allies. Marvel really primed the pump here, and if you were a progressive, there was no way you were rooting for Team Cheney Stark. (To further stack the deck, Cap is killed as he leaves a courthouse following his capture and trial.) And of course, Bush was president.

But Spencer points out just how backwards the pro-Cap arguments really are.

In the ‘Civil War’ storyline, Iron Man responded to a superhero-wrought tragedy by coming out for a Superhuman Registration Act, which would allow the government to register and regulate heroes and give them training. Cap and a band of likeminded heroes fought this — literally — and Cap died. But what Iron Man was really saying was no different than the uncontroversial principle that the state needs a monopoly on the legitimate use of force. When Cap launched his “the government will pick the supervillains” monologue, I was surprised that someone — like She-Hulk, who’s a lawyer — didn’t reply, “Wait, no. We have laws criminalizing certain behavior. We’ll have to follow those laws. That’s why the cops and the firefighters and the military and the intelligence communities don’t just go around legally killing members of the out-of-power party. Why would we be any different?”

And the problem was that the guy making this dubious case wasn’t Yellowjacket or Goliath (RIP) or Daredevil (a really bad lawyer, evidently). It was Captain Fucking America. A walking American flag and war hero who still manages to find Nazis to beat up. If that’s not an editorial thumb on the scale, I don’t know what is. Cap’s right because he’s Cap. It’s downright un-American when you think about it, but there it is. Now Marvel’s trying to renege on how Iron Man turned out to be (tragically) right by having Norman Osborn displace him and assume all the power Tony Stark accrued. But no deal! Iron Man was still right and Captain America crossed the line from libertarian into anarchist during ‘Civil War.’

This is absolutely right, and it’s where Marvel’s mutant/superpowered-person-as-minority metaphor really breaks down. Despite what folks believe, being black or South Asian or gay is not inherently dangerous, and so the real world arguments for arraying government resources against those groups don’t make sense. But in the Marvel Universe, the marginalized group is made up of living weapons who can shoot plasma from their fingertips or summon lightning at will or detonate electromagnetic pulses that cripple continents just by thinking about it. The arguments against checks on people who become unstoppable forces of nature during the onset of puberty sound downright Randian — they’re special, and anyone who wants to regulate their specialness is a) limiting their ability to do the most good with their abilities b) a hater doomed to mediocrity or c) both.** 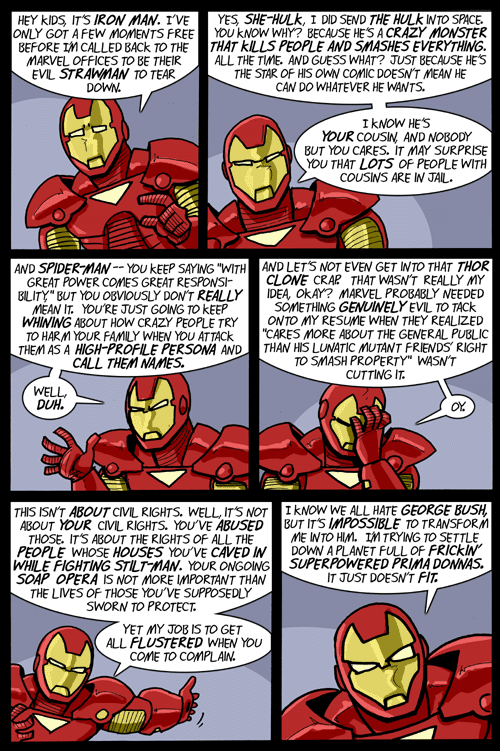 Switching companies real quick, it always struck me as weird that DC painted Lex Luthor’s  animus toward Superman as petty “anti-alien” bigotry. But his distrust of Superman makes total sense: this cat can shrug off nuclear blasts, lift mountains, fly near the speed of light and peer through solid matter. Shouldn’t everyone be suspicious of someone with that much power? Why should any government assume that he was operating (or would always be operating) on the Right Side? As always, the cynical dude in the bat-outfit had the right idea. Just in case.

**It still grates my nerves that this was the basic thrust of The Incredibles, which is a fantastic movie nonetheless.