NYT: Obama Turns Down Offer to be HNIC. 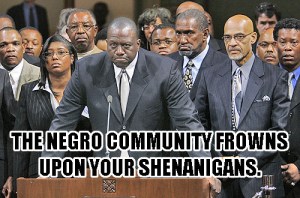 I imagine that, for the purposes of this piece in the NYT, “some” means a handful of reliable critics and cranks the writer sought out minutes after dreaming up this story idea from the ether:

Some black scholars say Mr. Obama has failed to lead on the race issue. The Kirwan Institute, which studies race and ethnicity, is convening a conference on Thursday to offer policy prescriptions. After analyzing the State of the Union address, the institute’s scholars warned that “continued failure to engage race would be devastating.”

Michael Eric Dyson, a Georgetown University sociologist and longtime supporter of Mr. Obama, is exasperated. “All these teachable moments,” he said, “but the professor refuses to come to the class.”

Obama was excused from class when he got elected president. In fact, he graduated.

Just be glad Rev. Al, of all people, didn’t fall for the okey-doke.

But seriously, there’s a number of problems here:

I probably missed a few things here, but you get the gist.

Anyway, in shorter form, Ta-Nehisi sums it all up with his headline: “Black People Have Opinions About Obama.”

We really shouldn’t have to explain this kind of stuff anymore.