Home » Browse PostBourgie » This is a Manning’s World.

This is a Manning’s World. 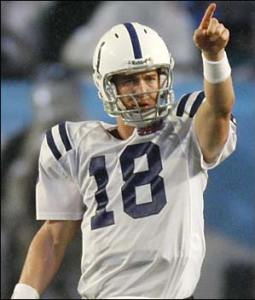 If not for Peyton Manning, the Colts would probably be the NFL’s equivalent of the Washington Generals – you’ve seen them with Jim Sorgi and Curtis Painter under center, right?

If not for Peyton Manning, Marvin Harrison and Edgerrin James might have been pedestrian NFL players and certainly not nearly as well paid.

If not for Peyton Manning, Bill Belichick punts the ball away on 4th-and-2.

If not for Peyton Manning, Reggie Bush is playing for the Houston Texans and not the New Orleans Saints.

Forget Brett Favre. Don’t talk to me about Tom Brady. Sure, I will listen to a strong case made for Joe Montana.

But with each passing season, it gets harder to deny Manning his rightful spot on the throne:

Gil Brandt, the former Dallas executive who squired the Cowboys great Roger Staubach through the media center here, said Manning was the best quarterback ever. So did Tom Moore, the Colts’ offensive coordinator, who also coached the Steelers Hall of Famer Terry Bradshaw.

The defenses Manning faces — with exotic blitzes and liberal substitutions — are far more complex and difficult to master than those in the past, Brandt said. And the Colts run a no-huddle offense almost exclusively, so Manning has just a few seconds to decipher the defense at the line of scrimmage, change the protections for the offensive line, adjust the routes for his receivers, then call the play, producing his familiar conductor-in-cleats performance art before the snap.

For most of my life, coaches have impressed upon me that football was the ultimate team game. That’s generally because it’s extremely difficult for one player to exert his dominance over a field with 21 others – teammates and opponents, all of them dependent on one another and working to deny one another.

Quarterbacks need their linemen to block, their running backs to run, their wide receivers to get open. And that’s just on offense. To win the game and do something more than roll up impressive offensive numbers, a football team also needs its defense to hold up its end of the bargain.

It’s the reason I’ve never given much credence to the argument that a player’s greatness is contingent upon the number of championships they win: what are the Chicago Bulls without Scottie Pippen, Horace Grant, Dennis Rodman, Bill Cartwright, Phil Jackson? What are the San Francisco 49ers without Jerry Rice, Roger Craig, Steve Wallace, Ronnie Lott, Bill Walsh? What are the Patriots without Bill Belichick dialing up the schemes for the defense?

Rings are good and all. But they’re not everything. Unless you think Trent Dilfer or Mark Rypien are all-time greats.

So yes, heading into today’s Super Bowl, Manning has only one championship ring on his resume. And if I was being honest with myself, I would admit that the Saints have a better overall team and overwhelming public sentiment favors the team from New Orleans.

That’s all well and good. But when you throw Manning into the equation, none of that seems to compute.

It goes back to the point I was making earlier about football being a team game. It is, sort of, when Manning is involved. Sure, Manning needs his teammates. But more than any other group of professional athletes that I can remember, they need him.

He loses James, he makes it work with Joseph Addai and Dominic Rhodes. He loses Harrison, he makes stars of Reggie Wayne and Dallas Clark. He loses Dungy, he helps Jim Caldwell – who was fired from Wake Forest – win the first 14 games of his NFL head coaching career.

He is Geppetto. He is the greatest of my lifetime. And sometime tonight, he’s going to hoist the Lombardi Trophy over his head again.

If I’m wrong, feel free to let me know how much of an idiot I am here in this space. Consider this our open thread for the Super Bowl.