Home » Browse PostBourgie » NBC May Very Well Be Racist, But This Doesn’t Prove It.

NBC May Very Well Be Racist, But This Doesn’t Prove It.

I’d like to make you all aware of a new post category we’ll be employing: “X May Very Well Be Racist, But This Doesn’t Prove It.”

It’s a phrase we at PB say a LOT amongst ourselves when it comes to the various racegates that seem to pop up regularly. After calls from Barack Obama and Eric Holder for Americans to have a Serious Conversation About Race, it seems like all we’ve gotten is a permanent racial silly season. The constant crying foul for things that aren’t actually racist fuels an even sillier backlash from people who complain: “I Guess I’m A Racist.” 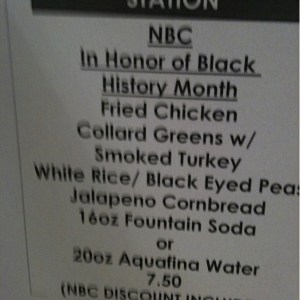 By now, you’ve probably heard about the Ahmir ‘?uestlove’ Thompson tweet heard ’round the innanets. The Roots’ drummer posted a picture of a sign in the NBC cafeteria promoting a soul food menu in honor of Black History Month. Cue racial outrage.

Later, of course, it came out, that the chef, a black woman, just wanted to share a good meal. (I felt especially bad for her because she even made the greens with turkey, not pork, which is so thoughtful.) Thompson later cleared things up, explaining that he thought the sign was funny, not racist.

To say it plainly, even though I’m sure you all understand this, there’s nothing racist about marking a holiday or special time of year with corresponding food. Food is the go-to cultural exchange item — school cafeterias the nation over serve crappy tacos on Cinco De Mayo, and hot dogs for the Fourth of July.

If you want to complain about racism at NBC Universal, then take issue with the lack of diversity in the company’s upper ranks, where only 2 out of the 18 executives are people of color (and 3 of the 18 are women). A lack of diversity doesn’t equal racism, either, but it’s something — unlike fried chicken for Black History Month — that’s worth thinking about.

I’m instituting the “X May Very Well Be Racist, But This Doesn’t Prove It” category tag, because the way things are going, I think we’re going to need it for a good long while to come.