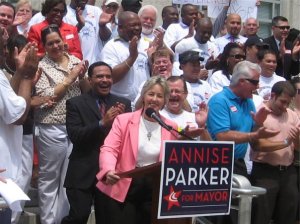 Unless you’re from there, it would probably be easy to write off Houston as a backward, smoggy, sprawling conservative stronghold. And there might be some truth to that.

But  Houston is also a large international hub when you consider the demographics, the institutions and the diversity of industries.

And last night, my hometown made a little history and confirmed its generally progressive lean: Houston became the first major U.S. City to elect an openly gay mayor, Annise Parker.

It’s hard to have an immediate reaction to that development other than, congrats, and let’s what and see what happens from here.

During my weeklong stay in Houston for the Thanksgiving holidays, I had the chance to watch a mayoral debate between Parker and her challenger, Gene Locke. To be frank, I wasn’t really impressed by either of them.

Of course, some of that was colored by the general lack of substantive policy differences between the two, their wooden mannerisms and an awfully boring segment where they traded questions on issues that had little to do with running the city.

Also, it would be hard to inspire much enthusiasm for change given the guy they’ll be replacing in City Hall. Bill White is the truth.

Anyway, there are some things that made this election particularly interesting: Parker’s sexual orientation (even Perez Hilton took notice!); the racial dynamics given that Locke is black and a former civil rights activist; and the general revelation to outsiders that Houston – home of the Bush family – is no typical Southern stronghold.

In some respects, Harris County – which includes virtually all of Houston – does not align perfectly with typical Texas politics. In the 2008 presidential election, it gave Barack Obama 19,000 more votes than Sen. Jon McCain – this in a state where Senator McCain won by 950,000 votes. Moreover, both candidates in Saturday’s nonpartisan election were Democrats.

Since the results were confirmed last night, I’ve heard (and read) a number of accounts claiming Parker’s victory – and the election of two other openly gay city council candidates – will be a substantive development for gay rights and marriage equality.

I’m not so sure; after all Houston voters recently decided against extending benefits to the partners of gay and lesbian members of the city government and, across the country, voters in state after state have dealt crushing blows to the fight for marriage equality.

But I hope this is a step in the right direction.

Asked earlier in the campaign by some particularly bigoted elements, “is this the image Houston wants to portray?,” I’m glad my hometown came up with the right answer.

The gay takeover is underway. And there are some attendant benefits to that.

May the rest of you be so fortunate.