Turns out, President Obama may have gotten some bad advice about the prospects for Chicago’s bid for the 2016 Summer Games. Fortunately, he seems to care little about taking the L.

From Valerie Jarrett: “We have plenty on our plate to do. He called the president of Brazil from Air Force One to offer congratulations, and by the time we landed in Washington, he was talking about healthcare.” 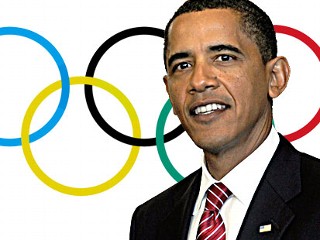 Also, rooting against our country is the hot, popular thing. All the (right-wing) kids are doing it.

Thus, without further ado, random-assness from the past weekend:

2. Former Labor Secretary Robert Reich offers up some ideas on what President Obama can do to promote job creation. He also finds time to slap around God Greenspan: “His views about the future should be carefully noted as being the exact opposite of what’s likely to be in store.” (Blackink)

3. Also, I’m a little more freaked out by this, and a little more ready to blame the anti-government sentiment behind stoked by the crazies, than Kentucky investigators are in the case of a man hanged to a tree with “fed” scrawled across his chest. (Quadmoniker)

5. They hate us because we’re free: the United Nations rates the U.S. 13th in their newly-released Human Development Index, which measures quality of life in 182 nations. (Blackink)

6. I’d always thought the Dave Chappelle joke was funny, and then I read Elizabeth Smart’s testimony about the horror she endured when she was allegedly kidnapped in 2002 and thought, I don’t know if I’d have the chutzpa to run away either. His broader point holds, obviously. (Quadmoniker)

7. The seriously awesome Penelope Trunk writes about how she handles having Asperger’s Syndrome at work. (Shani-o)

9. Could NY Dems engineer a way for David Paterson to bow out by softening his landing with a cushy spot in Congress? (G.D.)

10. The straight raw from Dog Canyon: Texas Gov. Rick ” Perry has certainly destroyed the integrity of the Texas Forensics Commission. He’s jeopardized future investigations. He’s sacrificed the truth to his political whims. He may have cost Texas money.” (Blackink)

11.Via Tayari Jones, Chinua Achebe will publish a collection of essays titled The Education of a British-Protected Child. (Belleisa)

12. I went looking for The Daily Dish and somehow wound up at Fleshbot. “As I finally collapsed into my lover’s arms with the final orgasm that drained every last drop of desire or need from my body and soul” … and so on. But thanks for sharing anyway, Sully. (Blackink)

13. Also via Tayari, Octavia Butler’s papers will be added to the Huntington Library. (Belleisa)

14. Amanda Hess highlights a frat at George Washington University that aims to end a legacy of homophobic stereotypes. The response was, well, sadly predictable. (Blackink)

15. Our play-cousin Alyssa Rosenberg chats it up with Matt Yglesias on Bloggingheads. (Shani-o)

16. Suffering from grief over the death of their babies, female monkeys in Morocco have been observed suckling their own milk. It’s apparently a learned behavior. (Blackink)

17. Some amazing, unsettling pictures from the Sumatra earthquake. (G.D.)

18. From TheRumpus.net: a guide to employers for managing writers in the workplace. (Belleisa)

19. Charting the incredible rise in teen texting over the past two years. (Blackink)

20. Glenn Beck as the new wave of literary fiction in Slate. (Belleisa)

21. Adam Serwer brings it home: “Any political movement that places The Bell Curve among its most important intellectual accomplishments can expect to have very few people of color in it.” (Blackink)

22. From The New Republic, John McWhorter writes a description of the essay he wrote here titled “What African American Studies Could Be.” (Belleisa)

23. Richard Prince asks can Ebony magazine be saved? And should we bother? (Blackink)

26. Method Man turned himself in today on felony chargees of tax evasion. He’s apparently been delinquent since 2004. What the blood clot? (Blackink)

27. I don’t know how I missed this during our Friday Random Ten tribute to Chicago: R. Kelly recently revealed that he suffers from illiteracy. This explains quite a bit. I’m thinking in particular of “I Like the Crotch on You.” (Blackink)

28. The Godfather of Go-Go music is still on the go. (Blackink)

29. To borrow a line from a good friend, this is one of those very rare times when I gleefully imagine McCain in the White House. (Blackink)

30. If you care, Deadspin is doing a great job of covering the Erin Andrews peeper case. If you don’t, sorry I wasted your time. (Blackink)

Sigh. So glad baseball season is almost over.

Until the next time, folks.