I don’t know what, if anything, can be learned from the fatal beating of 16-year-old Chicago honor student Derrion Albert. I don’t know if there are enough words to appropriately convey the tragedy. And I don’t know if watching the gruesome video footage will help much.

But I do know that this is no referendum on “the black community.” Derrion’s death is no more a reflection on me, my kin, my friends or my neighbors than, say, Thomas Junta was for hockey dads: 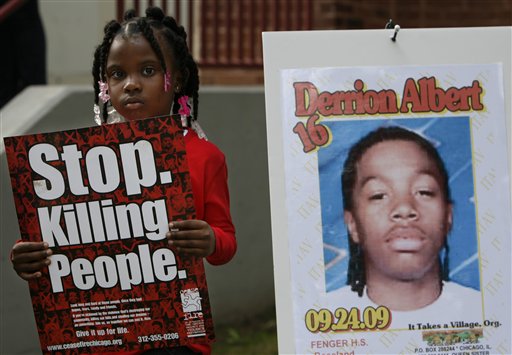 But most importantly, RIP Derrion. You deserved far better. And so do we:

1. The St. Pete (Fla.) Times is running a three-story series about what happens to people whose health care benefits run out or don’t completely cover their bills. Links here, here and here. (Blackink)

2. Nearly half of the U.S. private-sector workforce does not have paid sick leave, setting the stage for a “worse-than-usual” flu season as the country braces for another major sweep of the H1N1 swine flu virus. Apparently, sick leave is for socialists. (Blackink)

3. Justice Ginsburg was hospitalized on Friday night for lightheadedness, but was released and returned to work (Monday) morning. (G.D.)

4. Gov. David Paterson of New York went on “Meet the Press” and vowed to resist the people calling for him to opt out of his re-election bid, while denying that the president asked him not to run. (G.D.)

5. Everyone should read John Cassidy’s fantastic explanation on why markets do crazy things in this week’s New Yorker.  (Quadmoniker)

7. From the Dept. of Things I Wish Weren’t True: a Facebook poll asks “should Obama be killed?” (Blackink)

10. In a time of flat wages and greater debt burden, the LA Times highlights the increasing numbers of Americans who are using their homes as a “second job.” Said former Labor Secretary Robert Reich: “We can no longer assume that housing will be as good an investment for the future as it has been.” (Blackink)

12. Some homeless sex offenders in Georgia have set up camp in the woods because they are forbidden by law to live virtually anywhere else. (G.D.)

13. Speaking of sex offenders, here’s a roundup of posts at Feministing about Roman Polanski. (Blackink)

14. Discouraged journalists can take heart in the story of Jerry Mitchell, who’s been featured on “On the Media” before and now gets to call himself a genius. (Quadmoniker)

16. Fidel loves the kids: a new book about the longtime Cuban dictator claims that he has fathered 10 children by six women, and possibly 11 by seven. Shawn Kemp would be impressed. (Blackink)

17. Simon Johnson asks if the G20 is legitimate. (Blackink)

18. NPR profiles Chris Howard, the new 40-year-old president of Hampden-Sydney College in Virginia. Why mention this? Howard is black; his school is 93 percent white. (Blackink)

20. Tufts University has banned any sex act in a dorm room “while one’s roommate is present.” If only this rule had existed my freshman year of college. (Blackink)

21. Ten sexual controversies that changed TV. Guess we’ll have to take their word for it.  (Blackink)

22. This must have been an interesting afternoon at City Hall: Detroit dancers, DJs and club owners recently asked city council members to leave strip clubs aloooooooooone! I wonder what Kwame Kilpatrick has to say about this. (Blackink)

23. A map shows that somewhere in South Dakota is the McFarthest Spot. (Blackink)

25. Hoping to capitalize on his unparalleled campaigning talents, Chicago is turning to President Obama in its bid to land the 2016 Olympics. Matt Yglesias wants to know why anyone would want to host the Games. Katie Connolly looks at the pros and cons. (Blackink)

27. Fifteen years after the Rams and Raiders left, Los Angeles seems to be moving closer to bringing the NFL back to town. NBC LA speculates the San Diego Chargers are the franchise most likely to make the move. (Blackink)

*It was Monday when I started putting this post together.