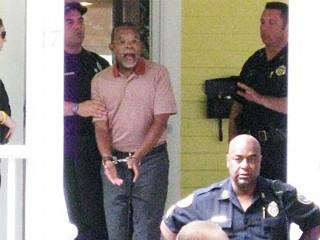 DougJ at Balloon Juice: “We’re a country where a uniform and a badge entitles you to arrest people for speaking loudly on their porches.”

First things first, Stacia, one of our co-bloggers, is writing a novel and posting a chapter a day at her personal blog. What is this space for, if not for a show of pride in our blog fam?

Neither Senators John Cornyn of Texas, Orrin Hatch of Utah, or Jeff Sessions of Alabama will join their Republican colleague Lindsey Graham in voting for Sonia Sotomayor’s SCOTUS confirmation. Senators Charles Grassley of Iowa and Tom Coburn of Oklahoma, the other two Republicans on the judiciary committee, haven’t said what they plan to do yet. (GD)

Also, Sessions outlined his opposition to the Sotomayor nomination in a USA Today column. “I don’t believe that Judge Sotomayor has the deep-rooted convictions necessary to resist the siren call of judicial activism. She has evoked its mantra too often. As someone who cares deeply about our great heritage of law, I must withhold my consent.” Of course. It’s always about heritage with these guys. (Bi)

Harvard professor Henry Louis Gates is also the man behind The Root, which saw an uptick in racist commenters in the aftermath of his run-in with Cambridge police two weeks ago. Also, some must-reads on the Gates mess: Rich Ford’s typically smart macro take, as well as TNR’s John McWhorter and the NYT’s Charles Blow wrestling with being black men on the receiving end of touchy encounters with the police. (GD)

Ezra Klein on why President Obama should review the playbook from Clinton’s health-care reform efforts in the early ’90s. “Clinton got the politics of reform wrong, but in important ways, he got the policy right. He just got it right too soon.” I also had no idea that before the ’90s, most people had something other than managed care. (Bi)

Nate Silver offers thoughtful analysis about the “healthcare timeout” to keep everyone from taking a dive off the cliff. In short, don’t read too much into breathless media reports about momentum or a lack thereof: “I don’t think the media has a liberal bias or a conservative bias so much as it has a bias toward overreacting to short-term trends and a tendency toward groupthink. The fact is that there have been some pretty decent signals on health care.” (Bi)

After writing a feature story about MTV’s “16 and Pregnant,” Amy Benfer pondered the difficulties involved in telling the stories of the many, many pregnant teenagers who choose to have abortions. (GD)

Jamison Foser at Media Matters raises an interesting question: why is it a given that abortions should not be covered under any health insurance reform? “The idea that taxpayers shouldn’t pay for insurance that covers medical services they don’t support is fundamentally incompatible with the very concept of insurance. If every interest group wields veto power over the medical care insurance can cover, insurance simply can’t work.” Yes. Though I might quibble a bit with Foser’s implication that Chris Matthews is a reporter of any sort. He’s not. He’s a commentator. (Bi)

Russ Feingold and John Conyers have introduced a bill that would, among other things, restore felons’ right to vote in federal elections. (GD)

On Friday, the federal minimum wage went up 70 cents to $7.25 an hour. It still isn’t nearly enough to climb over the poverty line. (Bi)

The White House and lawmakers on the Hill from both parties are moving toward ending the disparity in sentencing for crimes involving crack and powdered cocaine, which disproportionately punish black people. (Does anyone, anywhere, still support those guidelines?) (GD)

Poor people in the U.S. are living live in a virtual “law-free zone,” according to a new report from the Center for Law and Social Policy. The study finds that the legal needs of the U.S. poor are unmet more than 80 percent of the time. Ian Millhiser at The Wonk Room: “As the report explains, the United States invests far less in legal services for the poor than other Western industrialized nations. At the low end, Germany and Finland spent three times as much of their gross domestic product as we do on civil legal services for the poor. At the high end, England outspends the United States twelve times.” (Bi)

Few places in the world are as dangerous for women as South Africa, where 1 in 4 men say they have committed rape. (Bi)

Can the legalization and taxation of marijuana save California from its unparalleled budget woes? (Bi)

It’s easy to forget how far the Internet has come in a relatively short amount of time. A photo gallery from The Daily Beast takes us back through those dark, unappealing pioneer days on the Web. (Bi)

Before she was a famous chef, Julia Childs was a spy. (GD)

In case you missed it last month, Toure visited Martha’s Vineyard to learn about vacation, the Obamas and the peculiar racial dynamics of Oak Bluffs – “one of the most demographically unusual towns in America.” (Bi)

Angela at ProperTalks takes issue with that commercial for KGBKGB commercial with the black women in a hair salon discussing the origins of their hair weaves. “White people giving two black women who’ve presumably gotten weaves before information about the process is a bit condescending. What if the answer-givers had been black as well? I think that would have made the commercial easier to stomach. …Why’d homegirl have to do the neckroll and the finger wave at the end?? And all of a sudden her English is broken, with the “bet not be putting no yak up in my weave” retort. Her eyes bulged out a little too.” (GD)

For a YA novel called Liar about a short-haired black girl, Bloomsbury chose a cover with a white woman’s face because “black covers don’t sell.” (GD)

President Obama might not have been looking at any ass overseas. But that doesn’t mean Joe Biden wasn’t. (Bi)

More and more atheists are going through a sort of mock ceremony known as “de-baptism” in an effort to renounce their childhood faith. (Bi)

What if robots took over the world? (GD)

A cool – but sad – Google map showing the cluster of foreclosures around the country. (Bi)

The college freshman that lives inside of me just rolled off my futon in excitement: Method Man, Ghostface and Raekwon are planning a joint album. Now if only they invite along Inspectah Deck and the GZA. (Bi)

“…a casualty of abnormal normality.” Vernon Forrest, a former welterweight champion who did a lot of charity work around Atlanta, was gunned down during an attempted robbery. He was 38. His hometown newspaper also offers a fitting, final tribute. Also, SI has more about Forrest here and here.

In the future, we’ll all be using HGH and hitting 40 homers a season. Or maybe we should. Don’t worry about that bacne. (Bi)

Back when Mark Madsen was a benchwarming Laker, Shaq used his clout to get him a deal on a car and bought him a grip of clothes to welcome him to the team. “After that he drove us up to Beverly Hills and we went to a Big and Tall clothing store. I found a pair of jeans that fit and Shaq said to the store worker, ‘He’ll take eight of each color!’ I said, ‘All I need is one of each color.’ When Shaq kept piling on Italian sweaters, I told him I didn’t need all the stuff, but he told me it was a welcome gift and to relax while he paid the $2,500 bill.” (GD)

And finally, the Huffington Post asks: Is this the stupidest person in the world? Judge for yourself.

Also, I meant to ask this question a couple weeks ago: Did anyone here ever go see “Bruno”?