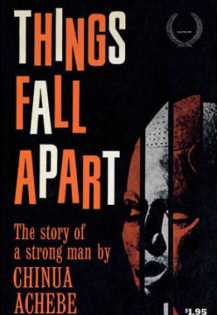 It’s the story of pre-colonial Nigeria, groundbreaking because it was originally written in English by a black African writer. The title was taken from a William Butler Yeats poem. It features the story of Okonkwo, a young man struggling to maintain the old customs with the ones brought by white Christian missionaries.

Gods and Soldiers, briefly reviewed at BookForum.com, is a new collection of contemporary African writing that features established and up-in-coming writers presented by geographic location. In the introduction to the collection, editor Rob Spillman writes:

“It has been fifty years since Nigerian Chinua Achebe published his novel Things Fall Apart, a classic work of anti-colonialism that became a worldwide literary sensation, its commercial and critical success opening the door for many other black Africans.”

Achebe is considered a literary father to widely-read contemporary African writers like Chris Abani, Chimamanda Ngozi Adichie and Tsitsi Dangarembga. Things Fall Apart was first published in 1958. We will be discussing the novel on August 15th.