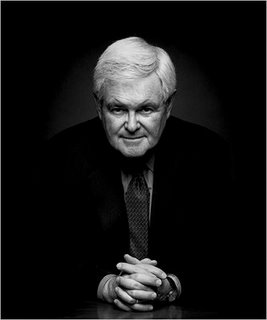 Ta-Nehisi’s (predictably) insightful post about the Letter From Birmingham Jail and the conservative relationship with black Americans got me thinking about something else from the letter. This excerpt, in particular:

Moreover, I am cognizant of the interrelatedness of all communities and states. I cannot sit idly by in Atlanta and not be concerned about what happens in Birmingham. Injustice anywhere is a threat to justice everywhere. We are caught in an inescapable network of mutuality, tied in a single garment of destiny. Whatever affects one directly, affects all indirectly. Never again can we afford to live with the narrow, provincial “outside agitator” idea. Anyone who lives inside the United States can never be considered an outsider anywhere within its bounds.

Now, compare that to this recent gem from Newt Gingrich:

Gingrich, his boastful tribalism and the round of applause that greeted that pronouncement gives us some insight into why some people consider “empathy” a character flaw rather than a sign of character.

That anyone could take pride in being an isolationist, in a time when our world is getting smaller and more interconnected than ever, says less than something about him and the people that give him a megaphone.

It is the mark of a sociopath, and it has no place in our global community. Indeed, the very idea of being an anti-citizen is intellectual nonsense and stunningly dangerous. Even Reagan would agree.

But if Gingrich doesn’t want to be a citizen of the world, fine. He can’t stop the rotation of the Earth, or the passing of time. He will accept citizenship, or he will be left behind – if it hasn’t happened already.

To borrow a line from Italian (egads! a foreigner!) poet Antonio Porchia, “Man goes nowhere. Everything comes to man, like tomorrow.”