Home » Browse PostBourgie » Another Five Years for Mugabe (if That's What He Wants).

Another Five Years for Mugabe (if That's What He Wants). 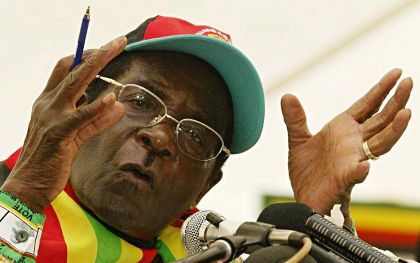 Some news outlets are reporting that Robert Mugabe, Zimbabwe’s president since independence 28 years ago, has conceded the first round of the presidential election to the opposition, and there is talk that he might even step down without a fight. A second round would require him or Morgan Tsvangirai, from the Movement for Democratic Change, to garner at least 51 percent of the vote, which some say would be even more demeaning than Mugabe losing outright. With the big man actually losing support from the country’s elite, despite giving out 450 cars to senior and midlevel doctors at government hospitals last week, (houses were promised within two years), Zimbabwe might actually have new leadership before the end of the month. But then again, the decision rests with Mugabe.

It’s next to impossible to feel ambivalent about Mugabe. As an outsider, I can’t understand how people can invoke the image of Mugabe the freedom fighter, and with starry eyes, argue that as the man who redistributed the land from whites to blacks, he deserves to remain president as long as he is able — as if the position is purely ceremonial. The hundreds of Zimbabwean refugees who cross the border into South Africa everyday for myriad reasons, who live outside the Department of Home Affairs for months, waiting for their papers to reside here legally, would disagree.

But the image of Mugabe the hero remains powerful, despite his wrongs and the absurdity of yet another flawed bid for president. Here’s an 84-year-old dictator who’s led Zimbabwe into the highest inflation rate in the world at an unfathomable 100,000 percent, with some of the highest incidences of HIV/AIDS, and human rights abuses that would make even Kofi Annan cringe. Journalists are billing Saturday’s election as the biggest opposition Mugabe has ever faced. But it’s been three days and we still don’t know who will be Zimbabwe’s next president.

In this race, Mugabe has dictated everything from who can vote (deceased white prime ministers who led the nation when it was called Rhodesia have, magically, been registered), how they can vote (last week, his administration announced that illiterate, elderly, and disabled voters will be escorted into the voting booth by a police officer), and who can cover the controversial campaign (Western media are barred. Neither the New York Times or CNN has run a bylined story, but both have done some great on-the-ground reporting).

The electoral commission has announced results for 109 of the 210 parliamentary seats. The government hasn’t disclosed any vote counts in the presidential, senatorial or municipal races.

“What the Zimbabwe Electoral Commission is doing now is simply buying time,” said Marian Tupy, an Africa specialist at the Washington-based Cato Institute, in an interview. The government hasn’t “decided what to do: to declare a state of emergency, to simply steal the election, or to postpone the day of reckoning by allowing a second round.” [Bloomberg]

This situation is so volatile it’s impossible to predict what will happen one day to the next. Today, there are reports that Mugabe might step down. But yesterday, a spokesperson said Mugabe was confident he won, and thus, had begun penning his victory speech. Mind you, Mugabe has said that any claims to victory by the MDC will be regarded as an attempted coup.