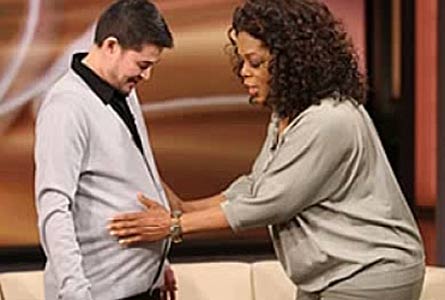 Yesterday was by far our little blog’s busiest day ever. Kinda amazing, since there wasn’t an update.

I couldn’t figure out why. Stacia pointed out that Thomas Beatie, that man who happens to be with child, was on Oprah yesterday. Apparently, going into yesterday, we were one of the top sites for this guy via Google*, even though we don’t even have a ton of info on this cat.

A lot of the commenters on Oprah’s message boards were not too keen on the whole Beatie thing, which is disappointing, but probably not all that surprising.

What is surprising? A Princeton biologist thinks that a biological male will actually be pregnant in the next 10 years.

Princeton biologist Lee Silver, an advocate for aggressive research in reproductive technology, has written about how simple such a pregnancy would be. Just pump a man full of female hormones (the right ones at the right times) and place a fertilized egg on a richly vasculated surface inside his gut. Voila — the man will have a peritoneal pregnancy, and the fetus will be ripe for a c-section in nine months. Occasionally zygotes implant like this naturally in women; they spill out of the women’s reproductive tracts and stick to the walls of their abdomens.

There are risks to parent and child alike. Peritoneal pregnancies often kill women who have them. And there’s no easy way to be sure whether the cocktail of hormones served to male-mothers would be right, or safe for the baby. Bioethical concerns, in other words, will and should hold back male pregnancies at least a little longer. But if legally male transexuals are already becoming moms — fairly uncontroversially — using old female plumbing, then once we figure out the right hormonal recipe, the decision to let a man bear a child using his original parts will have essentially already been made.

And still no cure for the common cold.

*Along with Christine Beatty. And Wesley Snipes’s alleged hatred of black women. Oh, and sagging pants.