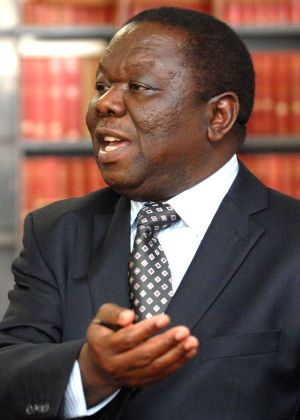 A while back we wrote that Robert Mugabe, dictator of Zimbabwe, would ultimately control who leads the country for the next five years. Unfortunately, that’s the case.

Morgan Tsvangirai, above, the leader of the Movement for Democratic Change, stepped down yesterday in his bid for president, citing a violence-plagued election. At least 86 MDC supporters have been killed, and 200,000 people have been displaced. Others, even 3-year-old children whose parents were alleged MDC supporters, have been brutally beaten and tortured.

Today, however, Tsvangirai’s spokesperson said he hasn’t handed in any formal notice of withdrawal. Instead, Tsvangirai was waiting to see how people would respond to his call for postponing the June 27 runoff and planned to make his position known on Wednesday. Also today, police raided MDC headquarters, suggesting that Mugabe, “who declared last week that only God would remove him from office, was in no mood to compromise.”

This whole election process has provided more dismal evidence of Zimbabwe’s wasted promise. Once considered the breadbasket of Africa, it’s now known only for violence and human rights abuses.

“We in the MDC cannot ask them to cast their vote on the 27th when that vote would cost them their lives,” [Tsvangirai] told reporters in Harare. “We will no longer participate in this violent, illegitimate sham of an election process.” [Mail and Guardian]

A quick re-cap: Tsvangirai beat Mugabe in the March general election, but since he supposedly did not win by a majority 51 percent, and Mugabe released “official” results more than a month later, a run-off election was slated for later this week. In the meantime, thousands of Zimbabweans have fled the country to neighboring South Africa, increasing tensions between foreigners and poor South Africans that led to a wave of xenophobic attacks last month. Nearly 100 are dead, and thousands are displaced. South African president Thabo Mbeki initially used the approach of “quiet diplomacy” — a.k.a silence — with Mugabe, and further showed his disinterest by sending a low-level official to a discussion on Zimbabwe led by Condi Rice a few days ago. Mbeki, however, did meet with both candidates on Wednesday in hopes of brokering a power-sharing agreement, like the one reached in Kenya after post-election violence there. But this was days after Mugabe said he’d go to war before he would cede power.

So now, what? If Tsvangirai doesn’t want to play on Mugabe’s terms — and how can anyone blame him, as he lands himself in jail with alarming regularity? — the situation must be at its worst. It’s unlikely anyone will step up.

I personally can’t get over how sad this situation is, and I’m bitter, (having just returned from South Africa, where I interviewed refugees and had friends from Zimbabwe who supported a number of people back home), that we’re hearing a lot of strong words from the West and from the Southern African Development Community, and not much else. Who besides the NGOs on the ground, are doing anything to curb the violence? At the same time, what can any of these countries actually do?

“Intervention is always very difficult in Africa,” said Michael Holman, former Africa editor of The Financial Times. “If you don’t have a well-drilled army and decent civil service to fill the gap that threw up the problem in the first place then you are going to have a disaster on your hands.” [NYT]

Hopefully, as Graham Bowley wrote in April, Mugabe’s party turns “against him, dissent breaks out in the military, or ordinary Zimbabweans finally take to the street.” Again, not likely, given the consequences.

But when you’re talking about a country with a fantastic inflation rate, and where just about everybody is unemployed, it might be too much to ask.