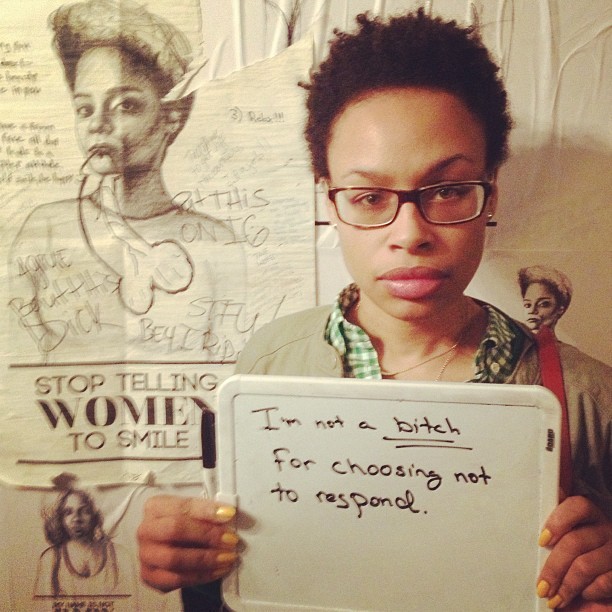 For  writers trying to get a book out of themselves November is well known as National Novel Writing Month (NaNoWriMo). Many have tried (and failed) to meet the goal of pumping out 50,000 words, but producer/artist Chakka Reeves is looking to change that, at least among her group of friends. I decided to chat with her about the creation of AfroWriMo, a NaNoWriMo support group for writers of color. We discussed  her inspiration for starting the group. If Chakka looks familiar it’s probably because you’ve seen her producing an indie film about indie soul or participating in Tatyana Fazlalizadeh “Stop Telling Women To Smile” street art project on street harassment or being the love interest in a Foreign Exchange video.  The woman stays busy and she’s always up to something fly. AfroWriMo is no different. Peep the interview below:

Terryn: How did you first hear about Nanowrimo? What did you think about it?Chakka: I heard about it and first registered almost six years ago, but I never completed it. I don’t remember exactly how I first heard about it, but I’m sure it was via the internet. I think I was intimidated by the empty page. I didn’t feel like I could just write without knowing where the story was going.

T.: Why did you decide to participate?

Chakka: I’ve had an idea for a story for about six years. I’m still not sure if I want it to be a screenplay or a novel, but I took an Intro to Fiction class at StoryStudio in Chicago this fall and I gained some tools that have helped me understand the story I want to write for the first time. I thought a collective challenge with other writers would help me stay motivated.

T.: What was the inspiration behind starting AfroNoWriMo? What has the response been like from the group members? What was your motivation for selecting the participants?

Chakka: A couple of years ago, I saw this photo of a writer’s group   that included Toni Morrison, Alice Walker, Ntozake Shange, June Jordan, Lori Sharpe, and Audrey Edwards. I thought “Wow! All that power in one room!” I know people from various disciplines, industries and cities that wanted to commit to writing more, and who I felt could create an incredibly powerful group as well. So I wanted to bring them together. Another dose of inspiration to start AfroWriMo (WriMo= Write More, formerly known as AfroNoWriMo) was the workshop and support aspect of the fiction class I took.  I wanted to duplicate that with a group of people who I admire. I dropped the No (for novel) from the group name because there are members who are working on increasing their output of non-fiction work and blogging as well.

The response has been more than I could ever dream of and I look forward to extending the functions of the group beyond daily prompts and inspiration sharing. At some point, I want each member of the group to share their writing and have an e-workshop of the piece via Google Hangouts, where they can get feedback on their work.

T.: What’s your goal for the whole thing? Is the group open to other folks?

Chakka: My goal is to help each member of AfroWriMo reach their goals, and have a regular forum to share their successes, struggles and resources. As for selfish goals, I hope that it continues to help me develop a daily writing habit, and help me stay in touch with each person in the group. AfroWriMo is a private group on Google+, but anyone who has a personal writing goal and wants to help other writers become successful can contact me about joining. Email me at chakka@chakkareeves.com or hit me on Twitter: @Freedomreeves