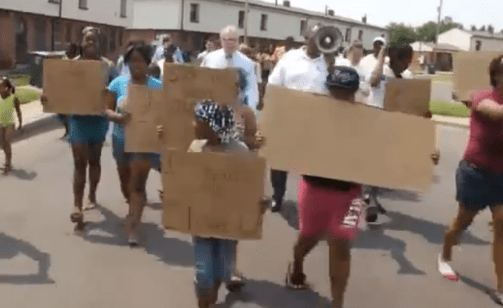 An anti-violence rally in Dayton, OH.

Over at The Root, Keith Harrison resurrects a tired trope.

Where is the outrage in our community about all of those slain blacks, most of whom were male and a plurality of whom were under 25 years old? Where are the protest demonstrations? Where is our community’s message that the ongoing carnage is unacceptable?

Sabiyah Prince, a Washington, D.C.-based anthropologist whose specialty is African-American life and culture and who has worked with community organizations in Harlem and D.C., says that it’s easier to garner support when the foe represents power. “In a situation where a child walks to the store and a quasi-law-enforcement person can shoot and kill him and get away with it … that mobilizes people,” Prince says.

It would be nice, Prince says, for community groups to have the numbers of supporters who are speaking out and protesting about the Zimmerman verdict. “It would make it easier to get things accomplished,” she says.

It would also help to communicate to the world that every black life matters. It would help others perceive us as something other than the ridiculous stereotypes too often portrayed in mass media.

This genre of concern-trolling has been in full-bloom since the Zimmerman verdict: black people should turn their attentions to the crushing violence in their communities, but they sit idly by as their children are butchered.  Can Keith Harrison get an amen?

There’s a tremendous arrogance in the idea that someone who doesn’t have to navigate these dangers every day cares more about them than the people who live in their edgeless shadows. There was all that anger that surrounded the killings of Derrion Albert or Hadiya Pendleton — the latter’s death became such a major story in black communities that her funeral was attended by Michelle Obama. There are the annual antiviolence events, the sermons in churches and mosques meant to comfort and mobilize. There are the marches and the rallies and the after-school programs and the community center town-hall meeting, the makeshift memorials at streetlights and the t-shirts emblazoned with the face of some kid cut down too soon. The intimation of violence is a waking, quotidian concern that informs where and when and how folks can walk down the street; it literally defines the borders of people’s worlds. All of this is psychically taxing. People are fatigued from caring so much. But not caring isn’t a luxury they have.