Home » Browse PostBourgie » The Zimmerman Trial Through an Abolitionist Lens.

The Zimmerman Trial Through an Abolitionist Lens. 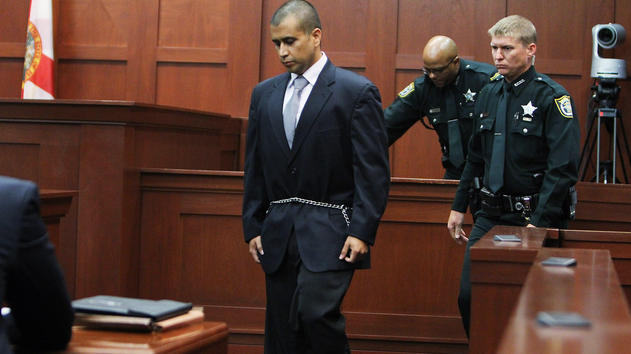 Dead weight seems to hang in the air as we wait for the verdict in the trial of George Zimmerman. My fears and hopes feel hinged on each shallow exhale as I sit at the kitchen table, sifting through articles, nibbling oatmeal, talking heads muted. Like many people I know, I’ve been angry. The murder of Trayvon Martin has been about a young person who was presumed suspicious, followed, and shot in the chest on his way back to his father’s house after stepping out for a snack. It is surely about that. But it has also been about black men everywhere who are read as a threat. It has been about the ease with which the police took Zimmerman’s word when he said he acted in self-defense, and those weeks he lived regular life after having murdered someone in cold blood. It’s especially about these facts when considered in relationship to how many black and brown people go to prison for comparatively minuscule reasons: shoplifting a candy bar, driving a little bit fast, firing a warning shot during an abusive encounter.

We have consistently been told that this is “not about race,” perhaps strategically, perhaps not. But of course — in a country where there is a $2 million bounty on the head of a black woman for allegedly killing a police officer, while a police officer who participated in the harassment and murder of a black man in front of the world on a BART platform is serving in the army — it is about race. However, it’s about race in ways other than the egregious dissimilarities between treatment of black life and white life. It’s also about the colors of the punishment system, and how we think through our relationship to it as a whole. As a person who is against the carceral state, I have struggled with my feelings about the Zimmerman trial. If I truly believe in prison abolition, then it cannot, seemingly, be a sometimes commitment.

As I await the jury, heart in stomach, I am trying to think about how this whole situation could have gone differently through an abolitionist lens. What if, when people became outraged that Zimmerman was “roaming free,” they had demanded transformative justice rather than arrest? What if, rather than sitting there dopily, George Zimmerman would have had to explain himself to Tracy Martin and Sybrina Fulton? A friend of mine who advocates community conflict resolution, even to the point of violence, suggests George Zimmerman deserved to get whatever may or may not have come to him without state intervention. Are these our alternatives? What do we want?

It feels easier to think about prison abolition when we confront all the damage the punishment system — which includes laws, their enforcement, and the multiple institutions and relationships involved in those practices — does to people’s lives. As the United States is home to 5% of the world’s population and 25% of the world’s prison population, the severity of the problem is blatant. As we consider the disproportionate number of black and brown people who are targeted by surveillance and other punitive procedures, the violence is clear. But if we also acknowledge that the institution itself cannot be redeemed, then that means working against its domination, even — and particularly — in cases like Zimmerman’s, when we may not be sympathetic to the potentially incarcerated. Everyday abolition has to be about thinking of ways to address conflict and harm outside of the punishment system, on a regular basis. I’m asking you to think with me about the ways that this may be possible. If George Zimmerman is convicted, perhaps there will be a moment of joy for a lot of people across the country: here, this apparently unapologetic man who murdered a teenage boy, will be locked away for some years. He will, maybe, feel regret or fear or hurt in prison. But, for each George Zimmerman, how many black, brown, trans, gender noncomforming, undocumented, or homeless people will also be locked away? And for what we might deem far lesser reasons? How many people with disabilities or medical needs will be confined to some kind of institution, be it called a prison or a hospital?

As we sit, wait, and watch, with our hearts in our stomachs and the weight of black death in the air, what are our long term hopes for the future of this carceral state?