Blogging The Real Housewives of Atlanta, Season 5, Episode 19: Battle of the Booty 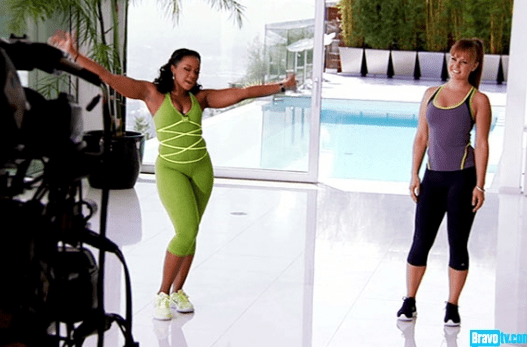 It’s been a minute since we’ve recapped the Real Housewives of Atlanta!  Let’s get everyone up to speed:

This week’s episode begins at the end of Kenya’s stay at Kandi’s housewarming party, which she left abruptly after finding out that Walter, her ex-unboyfriend, was in attendance.  “He’s a stalker!” she shrieked, ‘I don’t have my security with me!  It can’t happen like this!”  …What “can’t happen like this?”  Your impending death?  Do you seriously think this man is out to get you like that?  Because no one else does.  Walter was there because he was invited, at least, or because he was contractually obligated to be there, at most.  If you work at McDonald’s and the fry cook you dumped shows up the next day, he’s not stalking you–he’s reporting for duty and it has not a thing to do with you.

Plus, the notion that this man who wanted nothing to do with Kenya when they were “together” is now so obsessed with her that he’s planning his life around her schedule just shows how narcissistic and delusional she is.  This is after she claimed that Walter was gay because he never tried to sleep with her, by the way.  Because if you don’t want Kenya Moore, you must be homosexual.  Allow me to write you a prescription for three seats, madam.  Take them all at once.  Call me in the morning. 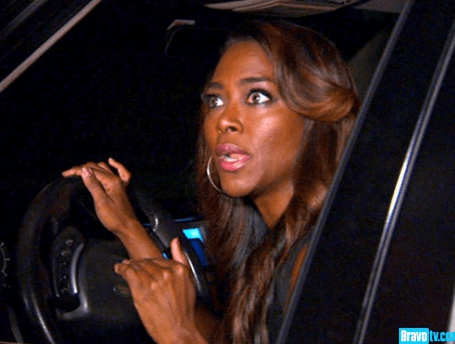 “HOW DARE THEY HELP HIM STALK ME BY BEING FRIENDS WITH HIM!”

Next we cut to a scene of Nene talking about how she has arraaaived, honey, and her life has come full circle.  Yawn.  I mean, awesome.  (I mean yawn.)

Something that I did notice in this scene though: I’m very put off by the way Gregg has turned into such a lap dog to get back in Nene’s good graces.  I don’t trust anyone who’ll say or do anything–any­thing–to get put back on.  Best of luck to them, though.

Someone else I’m wary of after this episode–Miss Laurence.  He served up enough cattiness this episode to cross the line from entertaining drama queen to yes-manning hater.  He joins Cynthia and Kenya for lunch agrees up and down with Kenya while she’s, again, babbling about how Walter showing up at that party was a sign of him stalking her.  But thankfully, Cynthia brought her ovaries with her and nipped that mess in the bud, telling her that she’s just going to have to deal with Walter being around because sometimes, people happen to show up at events that you attend, and to just get over it already.  Good for Cynthia; everyone needs a friend who will tell you the truth over the sound of your absolute craziness.

It’s time for the battle of the booty videos with Phaedra and Kenya.  We see Phaedra sitting in her makeup chair preaching on the power in embracing a woman’s curves, juxtaposed with Kenya and Laurence clucking about how Phaedra needs to get liposuction before she does a workout video.  Just hateful.  True, Kenya does have a more athletic physique than Phaedra, but Phaedra does not have a bad body at all.  I hope I look as good as Phaedra does after squeezing a human child through my hoo-hah.  That said, I won’t be buying either of these videos.  Phaedra was born with her booty, and I’m half convinced that Kenya bought hers, so I’m pretty skeptical about the results I can expect from either.

Next week: the season finale.  Hopefully it’ll make up for the boring spots in this week’s episode.