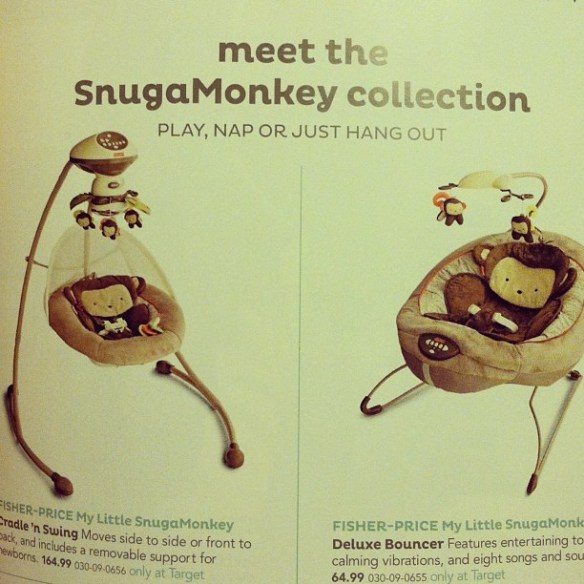 Cross-posted from Don’t Cross The Streams

Even before Cindy and I were married, I joked how I would side-eye anyone who gave our future child anything with a monkey on it. The first image that would pop in my head is the “That’s Racist” animated gif. Now that we have a baby boy on the way, I’ve been questioning how serious I am about it.

Cindy would occasionally show me monkey-themed baby gear just to see my disapproving reaction1. We received this Target baby catalog in the mail2 and there was a spread of the Snuga-Monkey Collection featuring a bouncer with little monkeys as a mobile.  I believe my reaction was, “Oh Hell No!” Cindy posted the pages on Instagram citing my distaste for it.  Some people definitely got where I was coming from while others did not see the big deal. I felt simultaneously vindicated and overly sensitive.

I think in the beginning, I was partially kidding about my hate for monkey-themed baby stuff.  Obviously, anyone who got us something like that would only be thinking how cute it looks. However, in having a conversation about the Instagram photo, I realized what my real fear is.  Even if they did not mean anything by it, if someone called my child a “little monkey” or anything like that, it would absolutely kill me.  Racists calling Africans and African-Americans “monkeys” has a long history and between anti-Obama rallies , idiots on Facebook and racist soccer fans throwing bananas onto the pitch, it isn’t going away anytime soon.  I wish I could break the association in my mind but I can’t.

How racially sensitive am I going to be with this or any future child?  No one wants to be the person who gets up in arms about seemingly harmless or well-intentioned gestures but if you let some things slide, people might feel blindsided when you finally do react negatively.  Is this just a sign of things to come?

1. When did monkey stuff get so popular with the baby and toddler set?
2. It’s like with our wedding.  You sign up for one website and suddenly every store knows you are having a baby