Last night, much of Twitter united to reclaim and rewrite our favorite less-than-progressive rap and hip hop lyrics.  It was a beautiful thing.

It all started when I was listening to 2 Chainz, which I do when there’s no one around to judge me for it, and I thought about the line “She got a big booty, so I call her big booty.”  I thought to myself, really?  You can’t find a more inventive nickname than that?  This is what’s passing for a rap lyric these days?  Then I thought to myself–how fucking rude.  You strip her of her name–her entire identity–and refer to her by her ass??  Inappropriate, 2 Chainz.  Not cool at all.  So, I revised it for him. 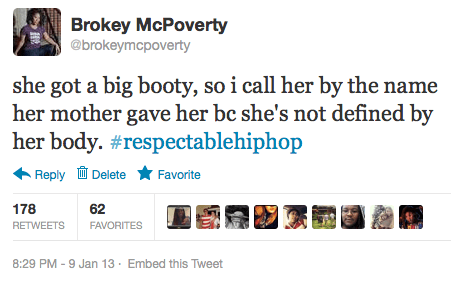 Then figured, why not help out some other misguided hippety hop rappers, too.  Thankfully, Twitter joined in on the campaign and what we got was a few of the most hilarious hours of tweets I’ve seen in awhile.  Not putting all of them here was tough, but here are some of the best.